This was the first and hopefully last opening day ever for Big Snow American Dream, the only year-round, real snow ski area in the Americas.  New Jersey is now one of the most accessible places to learn ski and snowboard, with two thirds of guests expected to be beginners.  About a dozen similar snow parks operate in Asia, Europe and the Middle East.

The mountain made of steel is one of what will be hundreds of tenants at American Dream, a $5 billion shopping and entertainment destination just five miles from midtown Manhattan.  With Big Snow plus a Nickelodeon Universe theme park, Legoland Discovery Center and DreamWorks waterpark, American Dream hopes to buck the trend of malls in decline by focusing outside of retail.

Canadian developer Triple Five Group managed to finish a job which first broke ground in 2004.  What was then known as Meadowlands Xanadu had its lifts installed in 2008, only to see zero snow and not a skier for 11 years.  I’m told the big lift had only about 50 hours on it until a few weeks ago.  After taking over the troubled project, Triple Five principal Don Ghermezian partnered with Snow Operating to bring the ski experience to life.  Snow is the ski industry disruptor behind Mountain Creek Resort and the Terrain Based Learning program in use across the country.  Before today’s first chair, Snow Operating President and CEO Joe Hession presented the Ghermezian family an Austrian bell like those seen at many Doppelmayr lift openings.

Two main lifts each rise 160 feet with approximately 700 feet of slope length.  The BIG Express quad is a Doppelmayr CTEC Sprint model with a capacity of 2,400 skiers per hour at full speed.  A parallel lift called The Poma (though also built by Doppelmayr) runs virtually the same alignment but was not operating today.  It really isn’t needed unless the quad goes down.  What’s wild is all of the towers come down from the ceiling, leaving every inch of snow for skiing and snowboarding.  Rounding out the lift offerings are two 225 foot conveyors from Magic Carpet Ski Lifts. 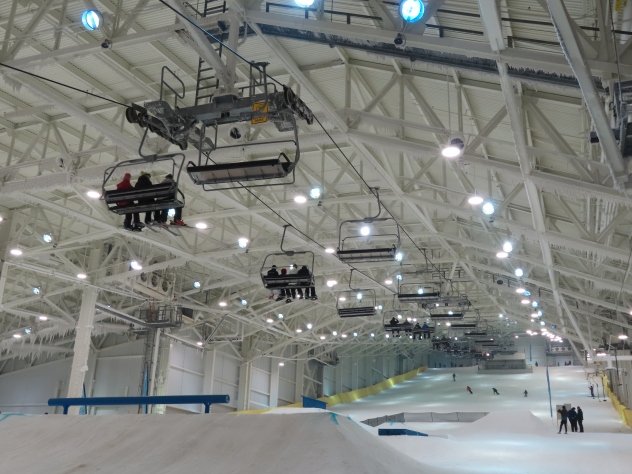 Olympians Lindsey Vonn, Red Gerard, Donna Weinbrecht and Kelly Clark shared the first quad chair just after 11:00, surrounded by champagne flutes and gathered media.  Alberta native Don Ghermezian kept calling the slope a hill, which it is if you look only by the numbers.  But everything else about Big Snow is substantial – from the 300-plus employees on staff to 5,500 tons of snow and 500,000 visitors expected to ski here yearly.  Snow Operating expects this one facility to increase skiing/snowboarding trials nationwide by more than 10 percent.

The experience is designed to complement rather than compete with traditional ski resorts.  Packages start as low as $49.99 and parking is free.  Rentals of skis/snowboards/boots come with jackets, helmets and pants for anyone to walk in and enjoy a day on snow.  Guests purchase an entry time but the clock doesn’t start until they begin skiing, removing the traditional rush to get ready.  Everyone passes through a “gondola,” where a video runs through the basics.

Big Snow partners include Head skis, Burton snowboards and Prinoth, the Italian snow grooming company which shares ownership with Leitner-Poma.  An awesomely-wrapped Husky X sits at the base of the chairlift and remote controlled versions are available for sale nearby. 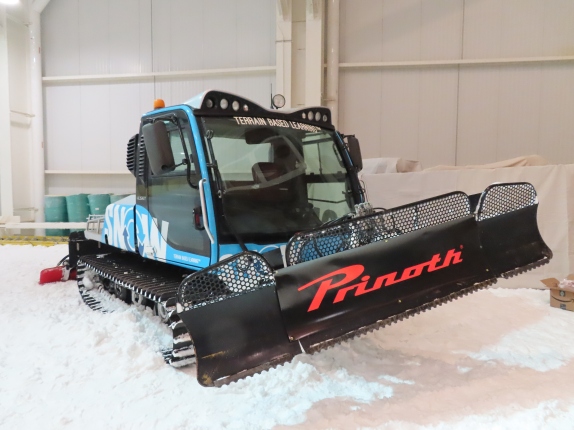 A ride up the chair takes only a few minutes and you can get a ton of runs with only an hour or two of time invested.  Snow conditions were excellent this afternoon as you’d expect when all the variables are controlled.  Radiant cooling from below keeps everything at 28 degrees between 10:00 am to 10:00 pm.  When making snow at night, the Big Snow team drops the temp and humidity.  Apparently very little melting occurs because there’s no sunshine.  As the slogan goes, every day is a snow day.

12 thoughts on “Indoor Skiing Comes to America with Big Snow”