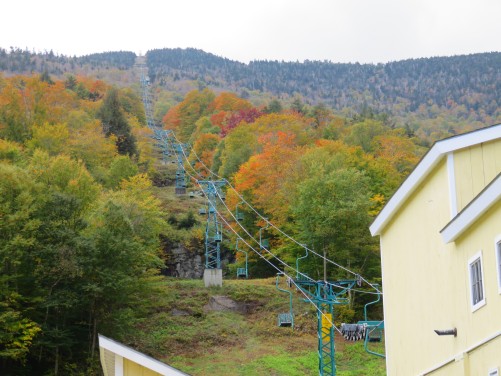 The single chair at Mad River Glen in Vermont is not the only single chair around but it’s certainly the newest, nicest and most famous.  Originally built in 1947-48 by American Steel & Wire Company, it has hauled skiers up Stark Mountain for the past 65 years.  The chair at MRG was AS&W’s 15th and cost $75,000 not including installation. Originally powered by a diesel motor, it had no electrical circuit at all during the early years.  Safety systems on towers and bullwheels were added later.  In 1995, Mad River Glen became the first ski area member-owned co-operative in the United States and it still does not have any slopeside lodging nor does it allow snowboarding.

By 2005, the diesel-powered single chair had become too expensive to maintain.  Chairs were failing NDT, the lift had no cable catchers or bullwheel retention and replacement parts were no longer available (except ones cannibalized from the AS&W single that had been replaced at nearby Stowe.)  Doppelmayr CTEC was brought in by the co-operative’s Board of Directors and developed two proposals – a $1.54 million rebuild of the single chair or an all-new double chair for $300,000 less.

END_OF_DOCUMENT_TOKEN_TO_BE_REPLACED

My Tweets
Join 966 other subscribers