Photo from fan, @bc3photo. Who said it best, "Blue skies over the greatest snow on earth." We agree with him! #snowbasinresort #utahisrad #skiutah

What this cable car ride needs is a rotating floor! #tablemountain #cablecar

This weekend I came to realize there is such a thing as too much snow at a ski resort… when there's over 100cm of fresh snow in 48 hours so anytime you fall over it takes a good 5 minutes to dig yourself out. It was hectic! 🌨 #snowsnowsnow #whiteout #madarao #nagano #skiresort #skilift #snowboarding #weekendtrip #igersjp #大雪 #斑尾高原スキー場 #長野県 #新潟県

END_OF_DOCUMENT_TOKEN_TO_BE_REPLACED

As one of America’s oldest resorts, Loveland Ski Area has welcomed skiers to the Continental Divide continuously since 1937.  Although now surrounded by the likes of Keystone, Breckenridge and Winter Park and with I-70 literally cutting through it, Loveland remains a local favorite with plentiful snowfall and varied terrain served by nine fixed-grip chairlifts.  The first double chair – a Heron – debuted at Loveland Basin in 1955.  A second ski area, Loveland Valley, opened in 1961.  A number of Heron, Heron-Poma and later Lift Engineering lifts were added through 1990.  The first modern Poma quad chair debuted in 1996, followed by a series of Leitner-Poma triple and quad chairs to modernize the fleet.  When Lift 9 opened in 1998, it became the highest-elevation chairlift in North America, a title Loveland held until Breckenridge opened the Imperial SuperChair in 2005.

Loveland now averages more than 300,000 skier visits annually and visitation increased by 45 percent between 2002 and 2010.  The ski area is now implementing projects from its 2013 master plan, a road map aimed at improving the guest experience while maintaining a laid-back vibe.  SE Group prepared the plan and notes, “Loveland has been known for its abundant, high quality snow; fun and diverse terrain; and uncrowded slopes.”  I visited on a bluebird Sunday in January and never once waited in a lift line.

Loveland generally builds lifts below maximum capacity and skier density is much lower than the industry average, with 1,800 acres of skiable terrain and an hourly lift capacity of over 14,000 skiers.  The development plan notes that Loveland’s lift network generally serves the terrain well, but some lifts are approaching the end of a typical 35-year lifespan and a few changes should be made.  Just last week, lifts 1 and 6 had to be closed for multi-day repairs but have since re-opened.

END_OF_DOCUMENT_TOKEN_TO_BE_REPLACED

Excited to announce the upgrade of Drink of Water Lift #5 to a high-speed quad to debut as Red Buffalo Express #5https://t.co/04CzVCGnpo pic.twitter.com/nf8m492s7h

Adding to the big December announcement of new six-packs at Vail, Breckenridge and Keystone, Vail Resorts today revealed another high-speed lift will replace Drink of Water at Beaver Creek.   The new 4,300′ high-speed quad will reduce the ride time from 8.6 to 4.3 minutes and nearly double capacity.  “Upgrading this essential beginner lift will provide high-speed lift access to the amazing beginner and intermediate terrain at the top of Beaver Creek, increasing capacity and making for a seamless lift experience for our guests on the hill,” said Beth Howard, chief operating officer. “We expect this improvement to take significant volume off Cinch Express, Beaver Creek’s second most-popular lift, and it really is an improvement befitting of Beaver Creek’s luxury, family experience, as it enhances a key beginner and family area of our mountain.”   The Drink of Water double is the last remaining lift at Beaver Creek from the resort’s inaugural season in 1980.

The Red Buffalo Express will almost certainly be built by Doppelmayr USA, as Beaver Creek operates an all Doppelmayr/CTEC fleet of 16 lifts.  The four new detachable lifts in Colorado are part of Vail Resorts’ $100 million capital plan this year and we learned this week the six-packs at Vail, Breck and Keystone will be installed by Leitner-Poma.    Eldora, Wolf Creek and Aspen are also likely to build new lifts for 2017-2018. 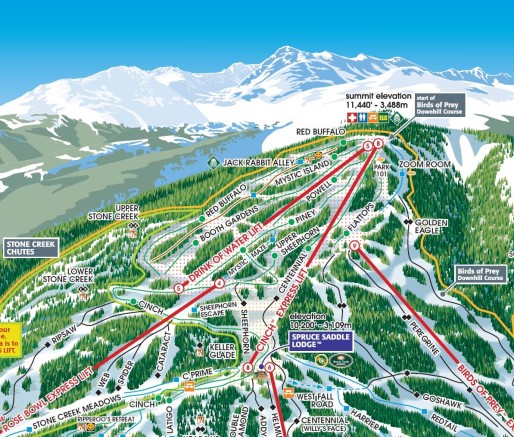 Eight new eight-passenger chairlifts debuted this ski season, the highest number in history. Twenty years since the technology debuted, Doppelmayr, Garaventa, Leitner and Poma have now built a combined 78 of these mega chairlifts on three continents and in eleven countries.  With 2016 seeing the greatest number of eight-passenger chairlifts constructed, a question on everybody’s mind should be: when will the world’s second largest ski market finally build one? 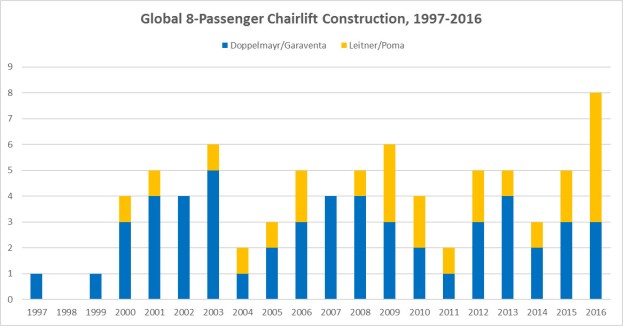 Doppelmayr debuted eight-passenger chair technology in 1997 (in Norway of all places) and continues to be the market leader, having built two-thirds of those operating today.  But for the first time ever the Leitner-Poma Group installed more than Doppelmayr and Garaventa combined last year.  In 2006, Leitner built the first combined installation with eight-passenger chairs and 10-passenger gondola cabins and there are now seven of these across Europe.  Bubble chairs and seat heating came along in 2000 and nearly every new eight-passenger lift features both these days.  In total, 60 percent of eight seaters globally have bubbles and half sport heated seats. 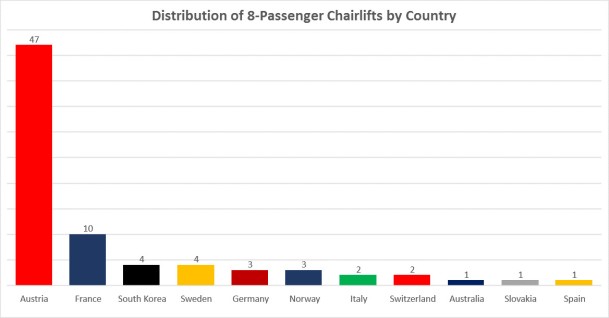 Austria is home to over 60 percent of the world’s eight-passenger chairlifts and exactly five have ever made it out of Europe.  Australia and Asia each got their first in 2003 but several leading ski markets have never gone there – among them Japan, Canada, China and the United States.

END_OF_DOCUMENT_TOKEN_TO_BE_REPLACED

Whitewater Ski Area will get its first new chairlift since 1975 this coming summer, when a Leitner-Poma fixed-grip quad will replace the Summit double chair in time for next ski season. “The team at Whitewater is really excited to be able to further improve the experience we offer here at the resort,” said General Manager Kirk Jensen on Monday.  “It is going to be a significant upgrade for the resort and ultimately for our guests.”

The 3,088-foot lift will run in the same alignment as the old with a 6.2 minute ride time and a vertical of 1,241 feet.  Towers will be taller, the center pole Riblet chairs gone and loading/unloading areas improved. Whitewater is owned by Knee Deep Developments Ltd. in a nod to the massive snow pack that usually graces Nelson, BC.  The mountain’s two other chairlifts were relocated from other ski resorts, most recently the Glory Ridge triple from Vail in 2010.  A truly new lift will be a welcome addition for guests at this gem of a ski area in the Selkirk Mountains.

A $15 million gondola system will connect the New York State Fairgrounds in Syracuse to a nearby amphitheater, Governor Andrew Cuomo announced this morning.  “This is very, very exciting and it brings the energy of both facilities together for a synergy between the two,” Cuomo noted, calling the planned gondola “world class.”  The lift’s 38 cabins will cross Interstate 690 along a 3,700′ route.  The project still requires federal approval but is scheduled for completion in June 2018.

The gondola will link more than 15,000 parking spaces at the fair to the 17,500-seat Lakeview Amphitheater, which will host major acts such as Zac Brown Band and Third Eye Blind this summer.  The amphitheater gondola station will also serve Onondaga Lake Park and its network of popular trails.  The state- and county-owned facilities are currently connected by shuttle buses operating on a circuitous route during major events.  Capacity of the eight-passenger lift will be 1,200 passengers per hour.  An expansion to 75 cabins would achieve an ultimate capacity of 2,400 per hour.  A manufacturer has not yet been selected and the state will hold a competitive bid process in the coming months.

A separate, privately-funded and operated skyride lift will also be built this spring, traveling 1,500 feet over the fairgrounds with between 100 and 120 double chairs.  Dozens of fairs across the country operate either chairlifts or gondolas for fair-goers, among them a new Skytrac ride at Cal Expo, a Partek chairlift at the North Carolina State Fair and the Texas Skyway gondola built at the Texas State Fair in 2007.

Governor Cuomo also announced $20 million in improvements at the state-owned Belleayre, Gore Mountain and Whiteface ski resorts today, including a new enclosed upper terminal building for Gore’s Northwoods Gondola and a new lift connecting Whiteface’s learning center to mid-station.  New York State owns more lifts than any other state – 27 in total – including the Roosevelt Island Tramway.  The government has been a frequent customer of both Doppelmayr and Leitner-Poma over the years.

Leitner-Poma wasn’t involved in recent work that likely caused last month’s fatal fall at Granby Ranch, but the original manufacturer of the lift will fix it.  Ten days after re-opening using only the lift’s diesel auxiliary, Granby Ranch has a plan to restore Quickdraw to full capacity with a new electronic drive.  In a statement issued today, The ski area acknowledged a third-party company modified the drive system over the summer, as I reported last week.  “Preliminary investigation has revealed that the issue that likely caused the incident was the independent contractor’s modification to the lift’s electrical drive/control system,” the release notes.  The third-party installed system only operated 13 days before a chair hit a tower Dec. 29th, killing 40-year old Kelly Huber of Texas and injuring her two daughters.

Earlier today, Granby Ranch said Quickdraw would be closed today and tomorrow for additional testing, as ordered by the Colorado Passenger Tramway Safety Board.  The area hopes to re-open again under diesel power in the next few days and Leitner-Poma will install the new electronic drive system in the near future.  The CPTSB will release its official report on the December incident in the coming months.

Update 1/21/17: A state spokesman says the CPTSB ordered the lift closed until further notice at an emergency meeting after reviewing “unusual/irregular conditions” observed while Quickdraw was operating with the diesel auxiliary.

A new lift changes a mountain.  In this story, the mountain is a volcano and the actors are Mt. Bachelor, Doppelmayr, Highlander Lift Services & Construction, Timberline Helicopters and the Forest Service. Cloudchaser: The Story Behind Building a New Lift is one of the best videos you’ll see in awhile.

Congratulations to the team on a job well done.  Thanks to their efforts, Mt. Bachelor is now the sixth largest ski resort in the United States!