A post shared by WorldSkiDestinations (@worldskidestinations) on Oct 27, 2018 at 7:38am PDT

The number of chairlifts at Utah Olympic Park will double within two years if the foundation that operates the Olympic venue successfully raises $11 million in donations.  Located near Canyons Village, the park debuted with a CTEC double in 1992 and added its second chairlift in 1999.  The Utah Legacy Foundation was founded in 2002 and created a model for post-Olympic sustainability, adding an alpine slide, two museums, zip lines and more to the facility.  Utah Olympic Park still hosts hundreds of athletes for training in multiple disciplines and the proposed ski expansion would better support them.

A $2.7 million phase one expansion would see Deer Valley’s Homestake lift re-purposed for intermediate training near the shorter ski jumps.  The 1999 Garaventa CTEC quad chair would have a mid load station and be installed next summer in order to open by late 2019.  This lift will be around 1,200 feet long with a vertical rise of 400′.  An even more ambitious project would add 30 acres of skiing on West Peak near the Olympic bobsled and luge track at a cost of $5.8 million.  At 3,280′ x 1,200′, this lift would be roughly comparable in size to Jupiter at nearby Park City Mountain.  The West Peak project is tentatively scheduled for 2020.

Utah Olympic Legacy Foundation President and CEO Colin Hilton told the Park Record this week that donations are off to a solid start.  “Through the fundraising efforts, we feel pretty good that we are going to secure the first $3 million of the $11 million campaign to be able to progress.  That’s why the Homestake lift is in the parking lot.”

Ramcharger 8 at Big Sky Resort is both the first eight passenger chairlift and first Doppelmayr D-Line lift in North America.  I headed to Montana yesterday for an update on this exciting project and a related one, the new Shedhorn 4.  Touring Ramcharger, it became clear the decision to purchase this lift was not just about the eight passenger chairs, heated seats or loading carpet.  D-Line has numerous small innovations made with mechanics and operators in mind that combine to create a new generation of Doppelmayr detachable.  A few features I noticed: Every grate and cover is designed to easily open and close for quick access to moving parts.  Belts that connect station tires each have individual tensioners.  Stairs lead into the terminals rather than ladders.  Many spots where metal meets metal are lined with rubber for noise and vibration dampening.  Doppelmayr says D-Line has more than 200 improvements overall. 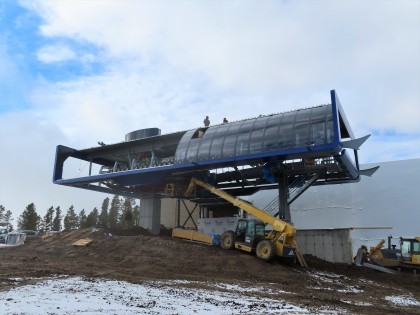 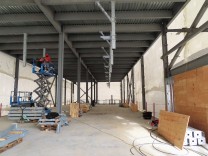 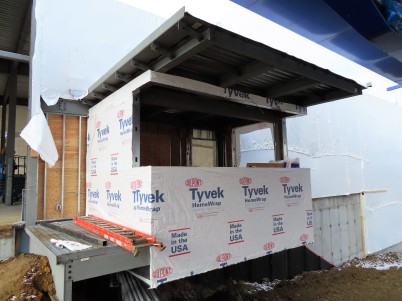 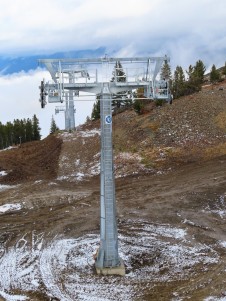 The massive Doppelmayr Direct Drive motor is in place at the top terminal and will be water cooled.  It will quietly and efficiently spin at just 13 revolutions per minute.  Because a gearbox and related shafts have been removed from the equation, all braking will be directly on the bullwheel.  There is a single diesel evacuation drive rather than separate evacuation and standby engines.  The west side of the top terminal features a 7,500 square foot parking facility for the chairs in two rows.  Part of the floor opens up to an equally-sized basement where bike carriers can be hoisted onto chair hangers come summer.  The outside of the barn is being wrapped in plastic for this winter and will be completed next spring.

Yesterday, the first four #Ramcharger8 chairs were delivered. Within the next few days, 60 more chairs will arrive. It may be October, but it feels like Christmas morning at #BigSkyResort – we can’t wait to unwrap them. https://t.co/RB3TC0JZuS pic.twitter.com/n8xWWB0316

The first four chairs and hangers arrived during my visit at the end of a long journey from Austria by ship, train and truck (the entire lift came over in containers, not just the chairs.)  The 64 carriers are emblazoned with Ramcharger 8 logos, feature heated seats and sport blue bubbles.  They are so large that only four fit in each shipping container! 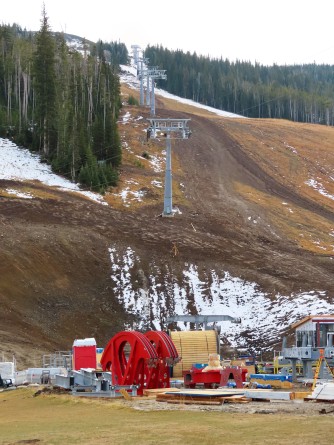 Steel will be set at the bottom tension station over the next 7-10 days, which we will be able to watch live.  This terminal’s legs, loading conveyor and gates are already in place.  Operators will be able to raise and lower the deck on demand for children to board and capacity will be 3,200 people per hour to start.  The 54 mm haul rope is also on site after its trip from Fatzer in Switzerland.  The comm line for this lift is completely underground as is apparently common in Europe.

END_OF_DOCUMENT_TOKEN_TO_BE_REPLACED

The beloved Snow Ghost double will be retired from Schweitzer Mountain Resort next spring after 47 winter seasons, the mountain confirmed today.  In its place, two new chairlifts will service Outback Bowl in improved alignments.  A Leitner-Poma high speed quad will climb through the Kaniksu Woods area with a Skytrac fixed-grip triple servicing the Lakeside Chutes vicinity above.  “Overall, we expect the two chair arrangement to complement our existing lift system and provide better access to some of the most popular terrain at Schweitzer,” says Tom Chasse, CEO of the north Idaho mountain.  Schweitzer completed a similar project on the front side in 2007, replacing 5,500 foot Chair 1 with the Basin Express and Lakeview lifts.

The detachable quad chair will offer a capacity of 2,400 skiers per hour and rise 1,447 feet in just over five minutes.  The triple chair capacity will be 1,800 per hour with a vertical of 1,360 feet and an 8 minute ride time.  “We’ve seen over the years how a similar two lift system in the South Bowl has been beneficial when we have weather challenges,” said Chasse. “By having the two lifts serving different aspects of the North Bowl, our hope is to combat similar challenges on the backside of the mountain.”  As part of the project, Schweitzer will add gladed terrain and four new runs surrounding the new lifts, which have yet to be named.

The puzzle pieces are all lined up and ready to go! 🚁 will be in the air soon moving everything into place. Stay tuned for some exciting updates! | @andrewjaybw | #powderchairbw |

Only a handful of ski mountains in the United States are government owned and operated.  The largest public ski outfit by far is New York’s Olympic Regional Development Authority, which runs Belleayre, Gore Mountain, Whiteface and the Olympic Ski Jumping Complex at Lake Placid.  All but one of these properties are likely to see new lifts in 2019.  Because the mountains are funded in part by taxpayers, potential lift projects are subject to competitive procurement.  Over the last month, the Authority has opened requests for proposals for a new high speed quad at Gore Mountain, a quad chair at Whiteface and a surprise gondola at the ski jump.

Back on September 17th, ORDA opened bidding for a chairlift replacement project at Gore Mountain.  “Gore Mountain Ski Resort will be replacing their existing triple chair lift with a high speed detachable quad chair lift,” notes the New York State Contract Reporter.  “This would be a turnkey project where the winning bidder would provide all materials, labor and equipment to build and install the lift.”  This is almost certainly the approved upgrade of Hudson, a 2010 Partek build.  Bids were due last Tuesday and the term is 12 months.  Leitner-Poma of America built the last three detachable lifts at Gore, so I’d argue it is their contract to lose.

Next up is an RFP for a new Bear Den quad at Whiteface, the largest ski mountain in the east by vertical.  The current Riblet triple in the Bear Den base area will become one of many late model Riblet lifts to be replaced recently.  I assume this one will be fixed grip but the contract reporter website does not specify.  Bids are due on Monday, November 26th.  Doppelmayr would seem to have the edge at Whiteface, having built the mountain’s three newest lifts.

END_OF_DOCUMENT_TOKEN_TO_BE_REPLACED 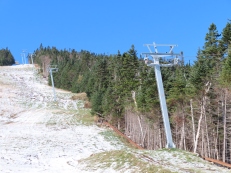 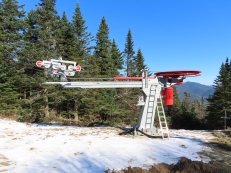 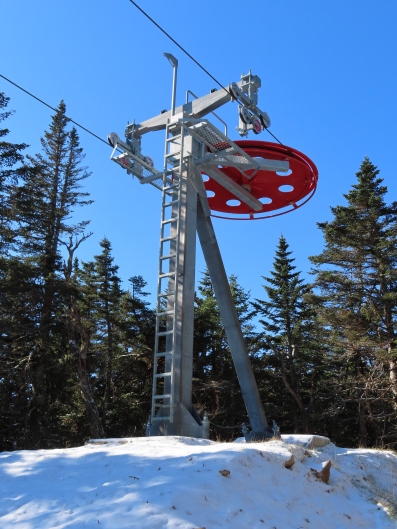 A day use ski area in the Cascade Mountains with lifts dating back to the 1960s, ’70s and ’80s is one step closer to becoming a regional destination with overnight accommodations.  Over the summer, Mission Ridge submitted applications to both the Forest Service and Chelan County seeking to cut new runs, build more lifts, add a second base area and debut cross country ski trails.

Following a dozen years of quiet growth, Mr. Scrivanich and his team are ready to elevate Mission Ridge further.  “We’re really excited about the Mission Ridge expansion plan,” General Manager Josh Jorgensen says in a launch video.  “The ski industry is certainly changing.  With Vail Resorts and Alterra purchasing Stevens Pass and Crystal Mountain Resort in the last six months, our effort to stay modern, current and relevant in terms of infrastructure is more important than ever.”

END_OF_DOCUMENT_TOKEN_TO_BE_REPLACED

Lift improvements are on schedule for opening day on Nov 22. For a more comprehensive look at the construction progress, go check out our most recent video in our profile. | 📸 @mbstarckphotography vow @coastmtnphoto | #ChooseToBe #whistlerblackcomb #whistler #readyforwinter #blackcombgondola