Snow King Mountain and Doppelmayr load tested the new Rafferty quad chairlift last week.  It will open along with a revamped alpine slide this weekend.  The opening is about 15 days behind schedule – not bad considering the scope of Snow King’s transformation.  This marks the debut of Doppelmayr’s new Alpen Star drive-tension terminal and their new, simplified control system.  The lift has mid-station unloading and will operate year-round.  A mountain coaster and treetop adventure park will follow in August with a new base lodge debuting this winter.  Meanwhile, the Doppelmayr crew has moved across the valley to build the new Teton Lift. 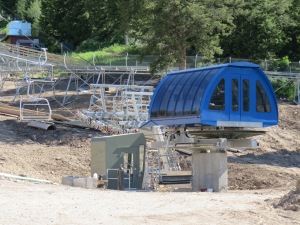 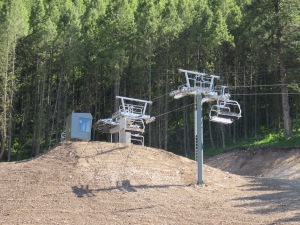 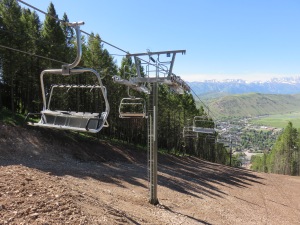 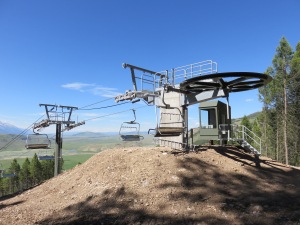 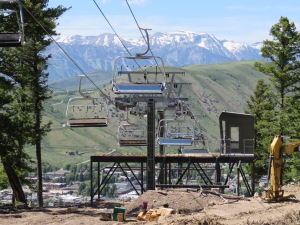 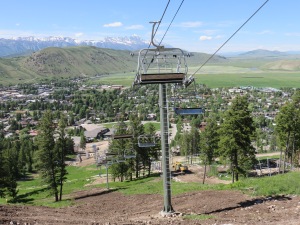 The sunsets have been unreal lately, and last night was no different. (📷: @stevegoffphoto)

END_OF_DOCUMENT_TOKEN_TO_BE_REPLACED

In July 2011, South Korea won the 2018 Winter Olympics, beating out cities in France and Germany.  Almost immediately, North Korea announced plans to build its own ski resort called Masik Pass.  The plan required at least five lifts despite the lack of any lift manufacturers in Asia.

Kim Jong Un’s government turned to the usual players, Doppelmayr and Poma.  Both refused to build the lifts, citing the international ban on selling luxury goods to the North.  Switzerland’s BMF agreed to a $7.7 million order but the Swiss government killed the deal.  Ironically, Switzerland is where Kim Jong Un went to private school in the early 1990s and where he learned to ski. 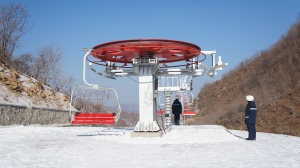 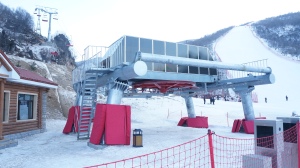 END_OF_DOCUMENT_TOKEN_TO_BE_REPLACED

Yesterday Sugarloaf Mountain Resort, the site of two of the worst lift accidents in recent memory, announced $1.3 million in lift safety upgrades including a new Doppelmayr drive terminal for the lift that rolled back in March.  The mountain will also launch a new website devoted solely to lift safety and maintenance with a tip line for anyone to submit questions and concerns about lifts.  All of this is moving forward despite Sugarloaf’s looming sale.

In December 2010, the Spillway East double, built by Borvig in 1975, experienced a de-ropement that caused numerous chairs to hit the ground and drag approximately 40 feet.  Eight skiers were injured and the last legal claim was settled just last week.  The State of Maine’s investigation found inadequate maintenance records, poor training, high winds, and component failure as probable contributing factors.  The full report is here.  Spillway was replaced by a Doppelmayr quad the following summer and renamed Skyline.

The King Pine Quad, a 1988 Borvig, rolled-back approximately 460 feet on March 21, 2015, resulting in numerous injuries.  Skiers went around the bottom bullwheel at high speed and many others jumped off.  Sugarloaf’s internal investigation found that the drive bullwheel’s drop dog failed to deploy due to a faulty switch and the lift was eventually stopped by an operator who manually activated the lift’s emergency brake.  The state has not yet released its investigation into this incident.  King Pine and its sister quad called Timberline were both closed for the remainder of last season.

END_OF_DOCUMENT_TOKEN_TO_BE_REPLACED

I thought it would be interesting to do a statistical analysis of the types of lifts built over time in the US and Canada and see what lifts tend to still be operating today.  I previously looked at the average age of lifts in different regions of the US and Canada and found that most lifts operating today are more than 25 years old.  The statistics below will show why.

First I looked at fixed-grip chairlifts.  I was surprised just how long ago double chairlift construction peaked – way back in 1971, when 146 double lifts were built in a single summer.  That’s equal to all lifts built in North America over the past five years.  Triple chairlift construction peaked in 1984 at 58.  Just four years later, the most quad chairlifts were built – 36 in 1988.  I would have guessed this to be much later.  Since 1988, quad and triple chair construction has remained relatively constant and equal with almost no double chairs built.

On the detachable side, the number of gondolas built each year remains fairly steady, usually under five per year.  Of the 473 high speed quads built to date, most went in between 1986 and 2007.  Detach quads peaked in 1998, when 32 were built in one summer.  Six packs peaked two years later but have always been less popular than quads.  Last summer was the worst year for detachable construction since the technology was invented; just eight were built in all of the US and Canada.  2015 will be better with at least 16 being built right now.

END_OF_DOCUMENT_TOKEN_TO_BE_REPLACED

#TeepeeTown2.0!!! Here's how it works, when the chair enters the station on the cable, the cable is running at 5 meters a second, the wheels all run at different speeds and work to decelerate and accelerate the chair as it enters and exits the station. When the chair leaves the station it will re-grip on to the rope three chair lengths behind where it entered the station. (We're nerding out hard on our new chair.) || #howitworks #chairlifts #summerproject #newchairlift #sunshinevillage #skiing #snowboarding #skicanada #mybanff

Change is in the air! #oneparkcity

END_OF_DOCUMENT_TOKEN_TO_BE_REPLACED

Jackson Hole Mountain Resort is celebrating its 50th anniversary in December which will coincide with the opening of new terrain and a shiny high speed quad called Teton.  JHMR’s first Doppelmayr detachable will serve three new runs in the area formerly known as the Crags.  This project is part of a major lift upgrade that included the new Casper detachable quad and will also include a second gondola.

The new lift will serve approximately 1,800 vertical feet of terrain between the Casper and Apres Vous lifts.  With a steep profile, Teton’s ride time will be under six minutes.  Having four detachable quads on the north side of the mountain will hopefully take some pressure off the aerial tram.

END_OF_DOCUMENT_TOKEN_TO_BE_REPLACED

Park City and Jackson Hole just started building new lifts but trail map illustrator James Niehues is already finishing illustrations for their 2015-16 trail maps.  Niehues planned to retire last year but apparently some projects are too good to pass up.  There is no question Mr. Niehues is the best in the business and I hope he keeps painting as long as possible.

Jackson Hole’s new Teton lift will open up a handful of new trails in between the Apres Vous and Casper areas this coming winter.  Mr. Niehues is repainting the portion of the map that was previously known as The Crags while the rest will remain true to his original 1991 painting.

Vail Resorts contracted James to paint an all-new, unified map of Park City Mountain Resort and Canyons Resort which will operate as one from 2015-16.  I was surprised and pleased to hear they were going with a painting instead of the awful computer-generated maps that Vail, Beaver Creek, Breckenridge and Northstar have gone to.  Niehues admits he had to get creative with portions of the map to show 37 lifts and 7,300 acres of terrain acres in one view.  The final result below is impressive and shows why paintings make more compelling trail maps than satellite photos.