The Versant du Lac detachable quad at Bromont, Quebec will carry skiers tomorrow morning for the first time since Feb 3rd.  That’s when a fast-moving fire started in the bottom operator house and spread to the return terminal before being put out by firefighters with help from Bromont’s snowmakers.  The operator building housed a snowmaking compressor and lighting equipment, which may have led to the fire.  For the past three weeks, the resort has been working with Doppelmayr to get the lift back in service as quickly as possible despite the lack of snow in Quebec.  If there’s a silver lining, that bad weather was the reason no guests were riding Lift 5 the night of the fire.

Doppelmayr fabricated and painted a new operator house in Salt Lake City which arrived in Quebec on Feb. 19th, just two weeks after the fire.  The lift was load tested on Thursday and while terminal damage is still visible, some burned out windows at the return won’t prevent operation for the final month of the season.  Presumably, Doppelmayr will return this summer and replace the remaining fire-damaged components.  The exact cause of the blaze is still under investigation but in the meantime, congratulations to Bromont crews for getting this key lift back up and running in 24 days.

We are proud and happy to announce the reopening of the chairlift #5 at the Versant du Lac tomorrow, Saturday, February 27, around 8 am !

This fall, the Oakland Zoo will open a unique new gondola serving a 56-acre expansion called California Trail, enabling the zoo’s 750,000 annual visitors to enjoy two distinct complexes less than four minutes apart.  It’s only logical that a ropeway system will serve exhibits on a summit featuring grizzly bears, mountain lions and gray wolves. By choosing to build a gondola, the zoo avoided the environmental impacts of roads, trails, and exhibits on steep slopes and won’t have to run higher-impact shuttle buses. Nik Dehejia, Oakland Zoo’s Chief Financial Officer notes, “the gondola system will be the first urban gondola of its size in Northern California and the second in the state. It will be an iconic feature for the Bay Area, drawing thousands from all over the region to Oakland.”

The detachable 8-passenger system is being built by Doppelmayr USA under general contractor Overra Construction.  The gondola will feature 16 CWA Omega IV cabins and 7 towers that are up to 68 feet tall.  Slope length of the lift is 1,780 feet with a vertical rise of 309 feet.  The system will move up to 1,000 guests per hour/per direction initially with the option of adding 8 cabins to reach 1,500 per hour.  Ride time will be a quick 3.95 minutes at an operating speed of 450 feet per minute.

END_OF_DOCUMENT_TOKEN_TO_BE_REPLACED

Timberline Four Seasons Resort plans to have the Thunderstruck lift re-opened Saturday after last weekend’s incident with help from Partek, Aerial NDT and Ropeway Construction.  A new crossarm will be installed to replace the one that fell from tower 12 and the lift will be load tested before it re-opens.  “We have assembled a world-class team of manufacturers, engineers, and safety inspectors who have been working diligently since the event took place to assess and repair the lift, with multiple levels of oversight at every step in the process,” the resort said in a statement posted to Facebook.

Here are the latest Timberline updates regarding Thunderstruck: https://t.co/OERxD8rb3n

Sugarloaf temporarily closed its Snubber lift (a 1985 Borvig triple) for inspections Monday after news of the incident at Timberline.  Sugarloaf notes it completed Borvig’s recommended reinforcement of towers on affected lifts in the late 1980s, as did Sunday River.

The State of Vermont ordered the closure of the 2,000 foot double chair at Suicide Six after cracks were found on two of its towers.  This lift was manufactured by Borvig in 1975 and has a different tower design than the ones at Timberline with no lifting frame. Because this particular lift provides the only access to the majority of the mountain’s terrain, the resort is closed until the towers can be repaired.

Added 2/25/2016: Sugarloaf announced today they performed non-destructive testing on the Skidway double’s towers this week in addition to inspecting Snubber.  Skidway is a 1988 Borvig double.  While the NDT found no problems, Sugarloaf will voluntarily install U-bolts connecting Skidway’s tower tubes and crossarms this week out of an abundance of caution.

END_OF_DOCUMENT_TOKEN_TO_BE_REPLACED 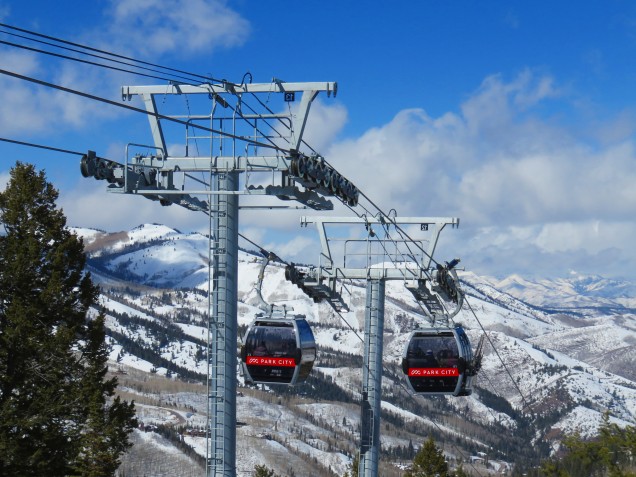 Vail Resorts’ $50 million endeavor to connect Utah’s two largest resorts last summer was one of the biggest infrastructure investments at a U.S. resort since American Skiing Company created The Canyons in 1997.  That summer twenty years ago, ASC bought so many lifts for The Canyons (8!) they had to split the order between three lift manufacturers to get them all done in time for the 1997-98 season. It’s hard to even imagine that happening today. Still, Vail did manage to build a two-stage gondola, add a six-pack, move a detachable quad, construct a mid-mountain lodge and re-brand an entire company over the last eight months.  I got to check out the results this week.

Park City Mountain is now the undisputed largest ski resort in America with 37 lifts and 300+ trails spread across 7,300 acres (it’s worth noting that Big Sky Resort still owns, and seems to have no problem using, the Biggest Skiing in America® trademark.)  The first thing I noticed is Vail did its best to remove all references to Powdr’s old Park City logo and the Canyons name, replacing them with the red infinity branding.  Despite these efforts, everyone still seems to call the northern half of the complex Canyons, or perhaps worse, The Canyons. Thousands of signs were changed over the summer and every employee got a new uniform. Most of the lifts were painted red although a few remain in black and orange.

The flagship of “One Park City” is the Quicksilver Gondola and neighboring Miners Camp lodge. Vail Resorts took the design they used for the Tamarack Lodge at Heavenly and Zephyr Lodge at Northstar and brought it east, demonstrating how the company excels at standardizing everything across its resorts. (Pepsi, never Coke, and safety bars on every chair at every mountain are other examples.)

END_OF_DOCUMENT_TOKEN_TO_BE_REPLACED

Nine people were injured and 100+ others evacuated when a crossarm fell completely off a tower at Timberline Four Seasons Resort around 9:15 this morning, causing skiers to contact the snow.  Thankfully, only two of those people required hospitalization despite the fact that numerous chairs fell 10-20 feet during public operation. The lift in question is called Thunderstruck and was built by Borvig in 1986.  It has Leitner chairs and is just over 4,100 feet long with 17 towers. Tower 12 is the one that failed. The pictures are harrowing and this incident could have been much worse.  Sugarloaf’s two recent high-profile accidents involved Borvig lifts – a de-ropement with chairs contacting the ground in 2010 and rollback in 2015.

The Thunderstruck triple lift is not operating. We do not have all details at this time and our immediate focus is on our skiers.

All skiers successfully evacuated from Thunderstruck lift. Here's what we know: https://t.co/SNEAfkVLTP 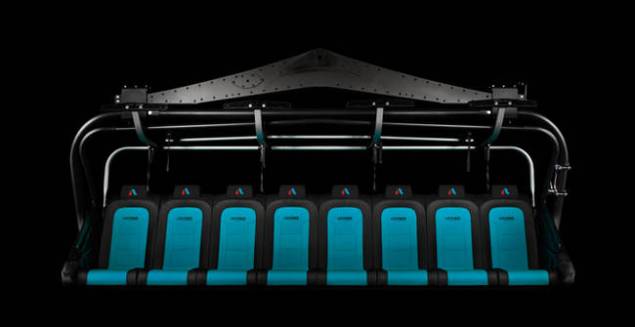 It was a beautiful but cold weekend on the mountain. The Gondola was a popular lift, a great way to stay warm on the way up and still enjoy the great corduroy cruising on the way down. #stowemt #whystowe #gondola #bluebird #mountmansfield #gondolier #2000verticalfeet #mountainadventures #skitheeast

END_OF_DOCUMENT_TOKEN_TO_BE_REPLACED

It’s official; in the wake of the incident two weeks ago, Big Sky Resort will remove and replace the Challenger double chair this summer rather than repair it. General Manager Taylor Middleton announced, “After exhaustive efforts to make Challenger operational for the rest of the season, we have determined that the best course of action is to replace it with a completely new lift. Skiers will continue to access the Challenger terrain via the Headwaters Lift for the rest of this season.”  The new lift will be built by Doppelmayr but there’s no word yet on model and capacity.

Breaking News… Big Sky Resort will install a brand new chair lift this summer replacing Challenger. Challenger will not operate for the rest of the season, but the entire Challenger ski complex is accessible from the Headwaters chair lift. This is just the beginning of some big news. Stay tuned. Photo: @ryandaythompson

In addition, a letter to passholders announced the Lone Peak triple chair – a 1973 Heron-Poma – will also be replaced this summer in some form.  Big Sky has struggled for years with aging lifts needing replacement.  The mountain’s gondola had a multi-tower de-ropement in February 2008 and never ran again.  Big Sky has been looking to build a new, longer gondola from the base of the mountain to the Lone Peak Tram that would span more than two miles.  With a mid-station, such a gondola could replace the original Gondola One, Lone Peak triple and Explorer beginner double in one alignment.  Elsewhere on the mountain, the Shedhorn double needs more capacity and Big Sky has floated an idea of a lift up Liberty Bowl.

If you include Moonlight Basin and Spanish Peaks, what is now Big Sky Resort built an amazing 13 new lifts in six years between 2002 and 2007 (with 7 more going in at the Yellowstone Club.)  The 2008 recession literally stopped the construction boom in its tracks, with the Stagecoach lift at Moonlight left half-finished and abandoned when owner Lehman Brothers went bankrupt.  I’ve heard SkyTrac will be finishing that lift this summer.  It’s going to be a busy one on Lone Peak.