Fast-moving fires tore through Gatlinburg, Tennesee last night, forcing the evacuation of 14,000 people and burning at least 250 structures.  The town home is home to the Ober Gatlinburg ski resort, a scenic aerial tramway and the Gatlinburg Sky Lift.  While reports are conflicting, Ober Gatlinburg posted on its Facebook page that the ski resort is undamaged and the company is assessing the lower tram terminal downtown.  VonRoll built a 130-passenger tramway between the town and ski resort in 1973 and it received new cabins in 2007.  The ski area features two Borvig quad chairs, a 1978 Riblet double and 1962 Carlevaro-Savio double.

Mysterious Mansion, Napa and Sky Lift are gone. The aquarium still stands the condition of the animals however is unknown. #Gatlinburg pic.twitter.com/WzvTm3SFLS

The Gatlinburg Sky Lift’s lower terminal is apparently standing, but the hillside it ascends burned with unknown damage at the top station.  Boyne Resorts Senior VP of Marketing Julie Ard told the Petoskey News-Review, “At this time, we are focused on the well-being of our valued Gatlinburg Sky Lift staff.”  The Sky Lift employs 26 people.  Ard went on to note, “video posted today by state officials gives us confidence that our street-level building is intact, but status of the lift’s upper terminal and surrounding structures is unknown.”  Boyne has continuously operated the Sky Lift since 1954.  A Riblet double replaced the original Heron version in 1991.

END_OF_DOCUMENT_TOKEN_TO_BE_REPLACED

It looks like mother nature is starting to cooperate! #stevenspassion #thestokeisreal

END_OF_DOCUMENT_TOKEN_TO_BE_REPLACED

2015/16 was the second best year in Doppelmayr’s history, the company reported yesterday. Sales increased 5 percent over last year, reaching €834 million ($880.3 million.) Global headcount also rose by 127 employees to 2,673, half of which work in Austria.  Net income was €80 million.

The largest market for Doppelmayr in 2015 continued to be Austria, followed by Switzerland, France and Italy.  Latin America now accounts for 16 percent of the global total, higher than North America.  Southeast Asia, namely Vietnam, is a key emerging market for the company.  By the end of next year, Doppelmayr will have completed the world’s longest mono-cable gondola, the longest 3S, the largest aerial tramway and built the tallest towers in the rapidly-developing nation.

Winter resorts accounted for 82 of Doppelmayr’s 103 projects last year.  That means about 20 percent fell into the tourism, material transport and urban transportation categories. 103 is actually a ten year low in terms of number of projects, but those realized in 2015/16 tended to be large.  Some highlights from last fiscal year include:

END_OF_DOCUMENT_TOKEN_TO_BE_REPLACED

Nine years since opening Montezuma Bowl to skiers and snowboarders for the first time, Arapahoe Basin is expanding again.  The White River National Forest today approved the resort’s 338-acre Beavers Expansion as well as replacement lifts for Molly Hogan and Pallavicini.  Under the approved plan, the Norway double will also be removed.  These improvements will continue sustained capital investment by A-Basin owner Dream Unlimited since acquiring the mountain from Vail Resorts in 1997. 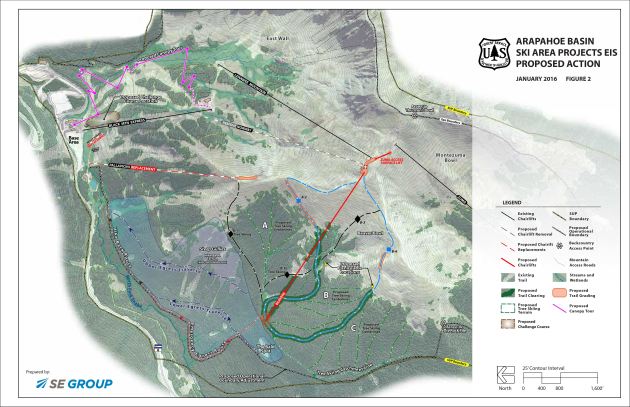 “The Beavers will provide something exciting — a whole other new and different experience,” said Alan Henceroth, Arapahoe Basin Chief Operating Officer. “It’s just awesome out there. I’m very confident people are just going to love it.”  The top-drive Beavers lift will be built as a fixed-grip triple or quad chair with an hourly capacity of 1,800 skiers and vertical of 1,499 feet, topping out at 12,462′.  Slope length will be 4,169 feet, just one foot longer than the Zuma Quad.  The Beavers lift is expected to open in 2018.

Once that project is completed, Arapahoe Basin will remove its three remaining fixed-grip Lift Engineering lifts, all built in 1978.  Norway will not see a replacement given its proximity to the Beavers and redundancy with Lenawee Mountain.  Modern fixed grip lifts will replace Pallavicini and Molly Hogan with the same hourly capacities – 1,200 and 1,000, respectively.  Leitner-Poma is likely to build A-Basin’s new lifts, having supplied Lenawee Mountain, Zuma, and the Black Mountain Express.

More than sixty inches of snow buried the Tetons since I last visited Grand Targhee, but that didn’t stop team Doppelmayr from making a ton of progress on the new Blackfoot lift. Timberline Helicopters assisted flying towers on October 20th and the haul rope was spliced November 12th.  With comm-line installation last week, the new quad chair is almost finished. 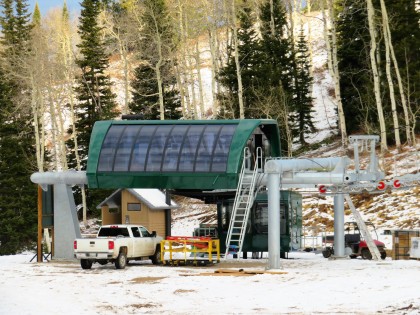 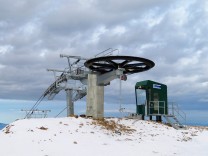 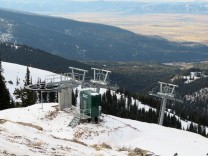 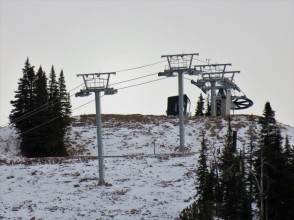 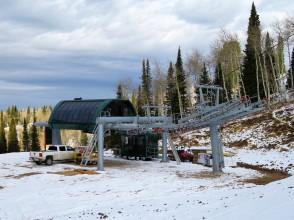 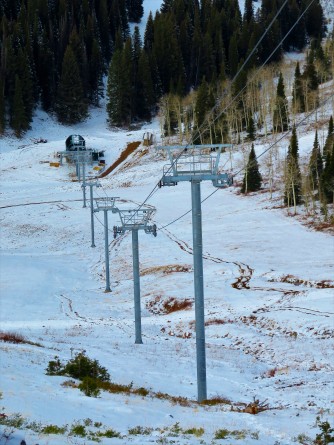 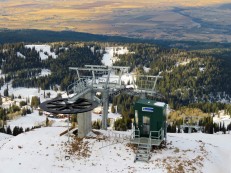 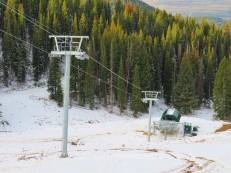 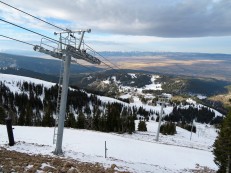 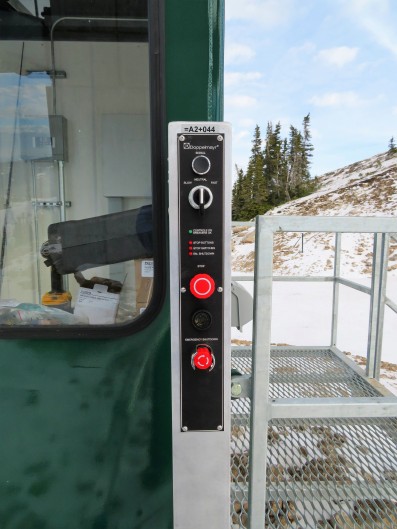 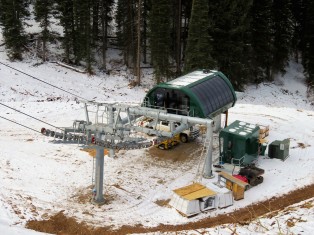 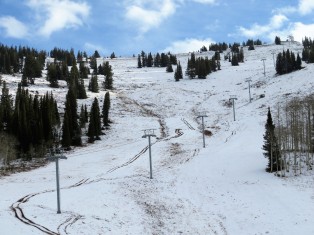 New Blackfoot marks a huge change from the center pole chairs and wooden ramps of the classic Riblet.  Both the load and unload areas were re-worked over the summer and are way more spacious.  The new quad will move 840 more skiers per hour (to 1,800 from 960) with a minute faster ride time.  A Tristar-model drive station features an auxiliary engine capable of running the lift at nearly full capacity during a power outage.  Although it’s a bummer Targhee had to delay opening last week, the recent nice weather no doubt helped crews finishing the new lift.  This week’s forecast looks solid so hopefully we’ll be lapping Blackfoot soon!

Two months after Doppelmayr and McLaren Engineering Group launched one of the world’s most complex gondola systems at Wynn Palace Cotai, the two companies have teamed up again on a wholly different project spanning the Hudson River in Albany, New York.  McLaren Engineering, headquartered in the region, and Doppelmayr, with an office in nearby Ballston Spa, self-funded the study.

A team of six professionals engaged with stakeholders over the past three months, culminating in the document’s release this week.  The gondola would connect America’s 9th busiest Amtrak station with Downtown Albany utilizing a mid-station and possible angle change.  Because it has all the components of a successful urban system – key points separated by a natural barrier over a modest distance  – the study results are very positive.  “After three months, the Project Team finds the CDG to be feasible,” the authors note.   “It retains the potential of being a transformational project that will spark increased mobility, tourism, and economic development in two areas of the cities of Albany and Rensselaer that are currently underdeveloped.”

Albany’s train station moved across the river to Rensselaer in the late 1960s, separating the city from its major transit hub.  Goals of the gondola project include addressing the physical separation, providing a new pedestrian and bicycle connection and improving quality of life in the Capital District.