The Majella Group of Australia has agreed to purchase Maine’s Saddleback, among the largest American resorts ever to go dark, and plans to build two new lifts as soon as possible.  Doppelmayr will install the lifts – a 1,500 pph Tristar fixed-grip quad to replace Rangeley, and a 1,200 pph T-Bar in place of Cupsuptic – a 1960 Hall. “The Rangeley Lift and T-Bar replacements have been carefully selected after a thorough analysis of the mountain operations,” Majella said in a press release. “We understand the importance of maintaining the serene trail experience and supreme trail conditions for which Saddleback is well known.”  Both lifts are being designed to be as wind-resistant as possible.

It’s been two years since the Berry family announced the possible closure of Saddleback if they could not secure financing for a new Rangeley lift.  The family spent some $40 million to upgrade the Kennebago and South Branch lifts to quad chairs and build a new base lodge between 2004 and 2008, but the business kept losing money with 80,000-100,000 annual skier visits.  By 2012, the Berrys put the mountain up for sale, asking $12 million.  With no takers, a Kennebago loan fell through in 2015 and the Berrys decided not to open again without a new lift serving the heart of the mountain.

Since 2015, sale rumors abounded and the nonprofit Saddleback Mountain Foundation attempted a crowdfunding campaign to buy the operation.  The group raised less than half of the $9 million needed for the mountain and a fixed-grip quad and confirmed last night they were not the buyer.  In the end, a more traditional investor emerged with plans restore Saddleback to its place as Maine’s third largest mountain with the goal of creating a premier four-season resort.  “We believe Saddleback requires a plan to create more lodging, more restaurants, and additional on-mountain opportunities,” Majella CEO Sebastian Monsour said today at the mountain’s base lodge, surrounded by locals and dignitaries from across Maine.

END_OF_DOCUMENT_TOKEN_TO_BE_REPLACED

If all goes according to plan, Montana Snowbowl will add up to 1,088 acres of ski terrain next winter in a homecoming of sorts.  Expanding onto neighboring TV Mountain, Snowbowl will nearly double in size, going from a modest two Riblet doubles and a Doppelmayr T-Bar to a major Montana player with seven lifts and 2,243 acres.  Construction is underway and legendary artist James Niehues is currently painting the trail map for North America’s biggest expansion of the year.

The Forest Service finally approved Snowbowl’s TV Mountain expansion in May 2014 after ten years studying a connection to the long-lost Snow Park Ski Area.  Owner Brad Morris acquired the Burlingame and High Alpine doubles from Snowmass (for free) in 2015 and the first of four new lifts will open this season.  Work started last fall, but early storms forced crews to pause over the winter. 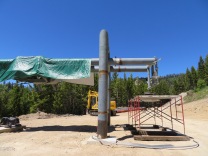 Montana Snowbowl does not have a true beginner or low-intermediate lift, in part because most Missoulians learned to ski at Marshall Mountain until 2003.  Facing a need to broaden its appeal beyond advanced skiers, Morris worked with the Forest Service on the expansion plan which he submitted for approval in 2004.  Thirteen years later, the beginnings of a new lift dubbed ‘B’ stretch 4,900 feet from the original Snow Park base area to the summit of TV Mountain with 23 towers under construction.  In contrast with the Grizzly chair that rises steeply from the current base area, the new lift will ascend a modest 1,440′ vertical west of TV Mountain’s namesake towers.  Ride time will be 11 minutes with a capacity of 1,200 skiers per hour.  Burlingame’s tension-return station is already standing while the drive station up top will likely be High Alpine’s.

END_OF_DOCUMENT_TOKEN_TO_BE_REPLACED

Silver Star Mountain Resort in Vernon, British Columbia will build a Summit Gondola next year, ending a three-year drought for new lifts in the region.  The 8-passenger Doppelmayr will replace the Summit double, a 4,000′ Mueller built in 1970.  The lift will open in July 2018 and serve summer guests before opening to skiers and snowboarders for 2018-19. After the upgrade, Silver Star will operate one of the most modern lift fleets in Western Canada with seven Leitner-Poma and Doppelmayr lifts built since 2002.

An initial fleet of 21 Omega IV LWI cabins in the five colors of the Silver Star logo will provide an uphill capacity of 1,200 passengers per hour, with the ability to add 22 more to meet future needs.  “These new cabins will whisk guests from the bottom to the top of the summit in a third of the time of the existing double chair,” says Silver Star Director of Operations and Maintenance Brad Baker. “The ride will now take four and a half minutes from village to summit traveling at five meters per second.”  Slope length will be 3,487′ and vertical rise 961′.  In a unique move, all foundations and the top terminal will be completed this fall with the remainder of the lift going in next spring in time to celebrate the resort’s 60th anniversary.  The addition of a gondola is a huge milestone for any resort and Silver Star will be no exception.

After debuting the Humphreys Peak Quad in 2015 and the Grand Canyon Express in 2016, Arizona Snowbowl will replace its Hart Prarie lift this summer, marking another major investment by owner James Coleman.  Surprisingly, the contract went to Doppelmayr and Snowbowl will operate new lifts from all three major manufacturers next winter.  In a blog post announcing the project, General Manager J.R. Murray noted, “Arizona Snowbowl enjoys having the best learn to ski and snowboard progression terrain in the entire western US with Hart Prairie boasting a wide open and gentle meadow, allowing beginners to learn and gain confidence on the slopes. Snowbowl is where Arizonans learn to ski and snowboard because of the fantastic and easy terrain.”  The new quad chair will only improve that offering.

Hart Prarie is a 1981 Riblet with center-pole double chairs, one of two such lifts remaining at the resort.  The new top drive, Alpen Star-model Hart Prarie will feature a Chairkit loading carpet, padded seats and footrests.  An 1,800 skier per hour capacity doubles that of the previous lift.  The alignment will be slightly shorter – 2,533 feet – with a vertical of 518′.

With new Skytrac, Leitner-Poma and Doppelmayr chairlifts built since 2015, Snowbowl will have increased uphill capacity by 85 percent next winter. Impressive indeed.