Citing a tight supply chain and manufacturer consolidation, the staff of New York’s Olympic Regional Development Authority today requested board approval for seven major lift projects to be completed in 2023. Three state-run ski areas – Belleayre, Gore Mountain and Whiteface – each would receive new and upgraded lifts under the ambitious plan.

At Gore Mountain, bids are already in for replacing the Hudson triple with an extended detachable quad. The lowest bid came in at $8,761,520, though ORDA has not yet released the name of the winning manufacturer. This lift would operate year round and be accompanied by a new lodge. ORDA now also wants to replace Gore’s Bear Cub Poma in 2023. A replacement fixed grip chairlift would cost an estimated $3.5 million.

Four lift capital projects are proposed for Belleayre, the largest of which is a full replacement of Lift 7. A $6.5 million detachable quad would follow a modified alignment beginning near the top of the Lightning Quad. The Belleayre Express, a 16 year old detachable quad, would receive new operator houses and electrical systems at a cost of $1.7 million. Lift 8 is in line for a $400,000 upgrade and a new conveyor would round out $9+ million worth of lift projects at Belleayre.

The largest single project is at Whiteface, the largest vertical ski resort in the east. ORDA plans to build a two stage detachable quad from the Bear Den base area to mid mountain with an angle station along the way. This lift would cost a whopping $16.5 million due to the complex nature of the alignment.

The ORDA Board nearly unanimously approved resolutions for all projects to proceed as quickly as possible. 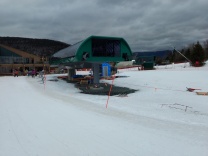 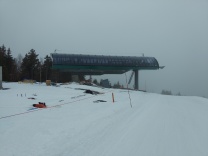 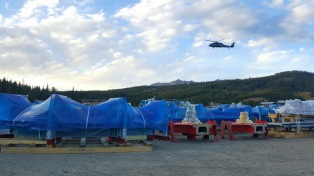 Whiteface is the largest resort in the East by vertical and played host to the 1980 Olympic Downhill.  The New York State-owned Olympic Regional Development Authority continues to operate Whiteface along with nearby Gore Mountain and Belleayre in the Catskills.  This week, Governor Andrew Cuomo proposed an impressive $62.5 million for capital improvements at ORDA facilities for 2018-19.  While the budget proposal is not yet law and does not identify specific items, it is likely to fund projects from Whiteface and Gore‘s management plans which, probably not coincidentally, were updated this month to include up to ten new lifts.

The biggest project in Whiteface’s future is the replacement of the Freeway double (a 1978 Hall) in a completely new and much longer alignment.  A new high-speed quad would start at in the base area and cross over the Little Whiteface double-double, topping out on the Upper Mackenzie trail.  Two new trails would be cut from the top, making this lift ideal for intermediate skiers and riders.  A second project would replace the 1984 VonRoll double named Bear with a fixed-grip quad.  An offload opportunity would be included near the current top terminal and the new lift would continue to the Mid-station lodge area parallel with the Face Lift detachable quad.

Significant improvements are planned for the Bear Den beginner complex.  A relocated Riblet double-turned-triple currently services this zone and would be replaced with a fixed-grip quad.  “The new quad and magic carpet at Bear Den will serve the extensive trail work we are planning in that area,” Whiteface General Manager Aaron Kellett tells NY Ski Blog.  “We want to extend the lift top terminal higher to create better flow in and out of the area.”  Last year, Whiteface proposed a new lift from Bear Den all the way to the Mid-station but that plan has morphed into a conceptual transfer lift between the two base areas.  A second transfer lift (think gondola, pulse gondola or cabriolet) could link the main parking lot to the base lodge.

END_OF_DOCUMENT_TOKEN_TO_BE_REPLACED

My Tweets
Join 967 other subscribers