Four people were injured when their chair fell approximately 30 feet from the upper section of the Stoos-Fronalpstock chairlift in central Switzerland last night.  It is believed the chair came in contact with a snow cat’s winch cable before falling.  Such cables are commonly used to assist with grooming steep slopes.  The lift involved is a Garaventa detachable quad with bubbles.

The accident occurred around 10:00 pm when employees of the Lindt chocolate company were descending from an evening private event.  Two of the four victims sustained life-threatening injuries.  “We are in close contact with the medical team and family members and wish our employees to heal as quickly as possible,” said a spokesperson for the chocolatier.  Six people in two other chairs were rescued uninjured.  The lift will remain closed while an investigation and repairs are completed.

No one was injured when a downbound cabin detached from a haul rope near the Swiss town of Schwyz this morning.  The empty gondola fell some 60 feet into a pasture and was heavily damaged.  Approximately 50 people in other carriers were brought into stations normally and the gondola was closed.  It appears the incident happened at or near one of the lift’s 16 towers.

The gondola is a 2014 Garaventa model with CWA Omega cabins and torsion grips.  An investigation will be undertaken by the Swiss Transportation Safety Board.  The company which operates the lift, Rotenfluebahn Mythenregion AG, says it will not reopen the system until it is cleared to do so and the rope is inspected for damage.

Update 10/21: The operator issued a statement blaming the accident on high wind.  The affected cabin collided with the tower before falling.  The installation was already in the process of being cleared of riders when the incident occurred, a process which takes 20 minutes.  The gondola remains temporarily closed.

There will be no auction of the property as the bank loan terms are being satisfied.

This is not a good week for tramways in Europe.  An incident last night on the highest mountain in Germany severely damaged one of two Eibsee Cable Car cabins during a practice exercise.  Apparently a rescue carrier broke loose due to a broken chain hoist and crashed into the 120 passenger tramway cabin below at high speed.  Like with the fire at a French tram on Tuesday, the lift was free of passengers and luckily no one was injured.  A Zugspitze spokesperson says the Garaventa-built tram will be out of service until further notice.

The lift became the pinnacle of ropeway technology when it opened last December, breaking world records for the tallest lattice tower (416 feet), longest ropeway span (10,541 feet) and highest vertical rise (6,381 feet), making this a truly stunning setback.  When a cabin on the Alyeska, Alaska tram hit a tower in 2013, technicians were able to replace it with a counterweight in just a few weeks until a new cabin could be manufactured.  We’ll have to wait and see whether CWA can repair the Zugspitze cabin or must fabricate a whole new one. 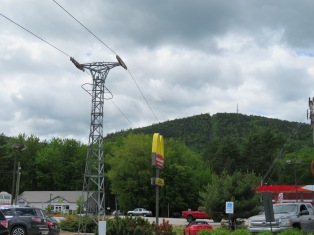 From Fjord to Sky in Five is the tagline for the Loen Skylift, a spectacular new sightseeing tramway and adventure destination in Norway that debuted this morning.  Rising from the sea to 1,011-meter Mt. Hoven, the brand new Garaventa aerial tram becomes the steepest jig-back built in modern times and is already being hailed as one of the world’s great lifts.  “The Loen Skylift is the quickest and easiest way to explore the best of what Norwegian mountains have to offer,” said Richard Grov, general manager of Loen Skylift. “The trip from the fjord to the mountain only takes a few minutes.”

An ascent from dock to dock is 3,248 feet over a slope length of 5,021 feet, yielding an insane average grade of 53 degrees.  That’s much steeper than every lift in North America, the steepest of which averages only 34.3 degrees.  At seven meters per second, a Skylift ride takes just five minutes and the machine can transport 460 passengers each hour in two 45-passenger CWA Kronos cabins.  As the Doppelmayr annual brochure notes, “[The Skylift] features one strongly-overhanging tower standing on two feet and anchored back with a tie bar.  The tramway has two sets of track ropes and no track rope brake.”

END_OF_DOCUMENT_TOKEN_TO_BE_REPLACED

Every Spring, Doppelmayr publishes a sweet book with pictures of and technical info for every installation the company completed worldwide in the prior year.  Often called the Worldbook, this year’s edition features 106 projects on 189 fascinating pages with particular emphasis on the company’s next-generation platform called D-Line.  Among the achievements realized by Doppelmayr and Garaventa in 2016:

If you don’t happen to get the book in the mail as a Doppelmayr customer, luckily the company now publishes an online version of the Worldwide book for all to enjoy.  The pictures alone are worth your time.