Work is underway on the new Crystal replacement! Concrete for the bases of the new towers is being poured over the next two days, then construction will be completed next year in time for the 2020/21 winter season. Photo taken: October 9 #sunpeaks360 #explorebc #explorekamloops #sunpeaks

Earlier this week, we installed the towers for our brand new Over and Out chairlift. Located by the bottom of Tombstone Express, Over and Out is a fixed grip quad designed to quickly and conveniently return you to Canyons Village so you can spend more time exploring the vast terrain across our mountain. #SeizeTheSeason #OverAndOut #NewChairlift

Mark Bee will cap a 30 year career in the lift business when he retires as president of Doppelmayr USA on March 31st.  Austrian-born Katharina Schmitz will be promoted to fill the role.  Bee will remain on the board of directors for the company’s North American entities.

Mark joined VonRoll Tramways in 1989, seven years before that firm was acquired by Doppelmayr.  He was instrumental in merging Doppelmayr USA with Garaventa CTEC in 2002 and oversaw more than 400 lift installations over his tenure.  “It has been an honor and a privilege to be part of the Doppelmayr organization, and to work in the ski industry,” said Bee.  “I could not have imagined a better career or a better company to work for,” he continued.

Katharina Schmitz joined Doppelmayr in 2018 as Vice President, Project Management.  She had moved to the United States back in 2005 and previously worked in the automotive and aerospace sectors.  Earlier this year, she was promoted to Vice President, Operations where she is responsible for production, logistics and construction.  “When we hired Katharina last year, I thought she might be overqualified for the position we were trying to fill, and as it turns out, she was,” said Bee.  “She immediately earned the respect of her co-workers with her team-oriented approach to problem solving, and her ability to quickly learn our business.”

“As a native Austrian and avid skier, I was well aware of the Doppelmayr name and I was ready for a career change,” Katharina said about joining the 126 year old ropeway company.  “When I was offered a position, I jumped. Since joining Doppelmayr I have been impressed with the dedication and talent of the employees, and the continuous focus on solving problems for our customers.  I will work very hard to continue to advance the capabilities of our team to make sure we are prepared to provide the best products and services to our many loyal customers who have placed a great deal of trust in our organization,” she continued.

It should be no secret Doppelmayr is a company I admire and I would like to wish Katharina success in her upcoming role as well as Mark a happy retirement.

We’re thrilled to have kept 99.8% of material from our Brooks Express and Daisy Capital Project out of the landfill! The 2019 Epic Promise Report was released this morning, highlighting the big wins in efficiency and waste diversion across Vail Resorts. Check out the progress report (link in bio) as well as our construction blog for more! #stevenspassion

We might be biased, but we wouldn’t want to be anywhere else this weekend. In part because of these views, in part because of The Meeting Filmfest! Join us for Return to Send’er by @mspfilms and Romance by @level1 showing tonight at the @wheeleropera! (📷: @anndriggers)

This is how West Mountain rolls! Check out the new spool of rope for the brand new triple NW Apex Chairlift! #westmtn #neverstopimproving #westisbest 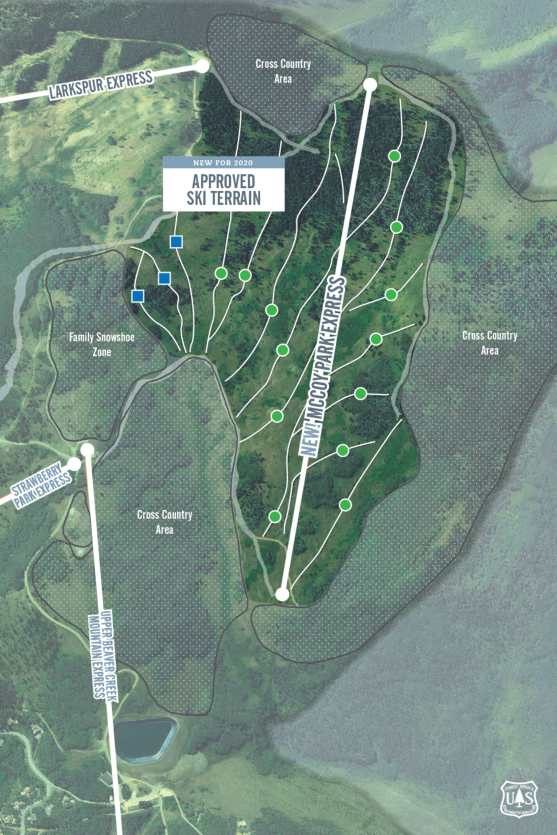 Beaver Creek will expand by 250 acres with a new detachable quad for the 2020-21 ski season, the resort has confirmed.  The expansion will feature 17 “groomable glades” for guests seeking low angle adventure at high elevation.  “McCoy Park is a separate, family-friendly zone allowing for a more relaxed experience for beginner families,” Vail Resorts notes, describing the terrain as “welcoming for beginner and intermediate skiers to connect and elevate their mountain experience.”  The new runs will be accessible from the existing Larkspur, Strawberry Park and Upper Beaver Creek Mountain Express lifts.

Transporting 2,400 skiers per hour, the high speed McCoy Park Express will span approximately 5,900 feet in length with a vertical rise of 840′.  A manufacturer was not announced but Doppelmayr has built every new lift at Beaver Creek since 2003.  The McCoy Park expansion was first proposed in late 2017 and green lighted by the Forest Service last November.  A second lift for egress from McCoy Park was also approved but is not yet slated for construction.

No one was injured when a downbound cabin detached from a haul rope near the Swiss town of Schwyz this morning.  The empty gondola fell some 60 feet into a pasture and was heavily damaged.  Approximately 50 people in other carriers were brought into stations normally and the gondola was closed.  It appears the incident happened at or near one of the lift’s 16 towers.

The gondola is a 2014 Garaventa model with CWA Omega cabins and torsion grips.  An investigation will be undertaken by the Swiss Transportation Safety Board.  The company which operates the lift, Rotenfluebahn Mythenregion AG, says it will not reopen the system until it is cleared to do so and the rope is inspected for damage.

Update 10/21: The operator issued a statement blaming the accident on high wind.  The affected cabin collided with the tower before falling.  The installation was already in the process of being cleared of riders when the incident occurred, a process which takes 20 minutes.  The gondola remains temporarily closed. 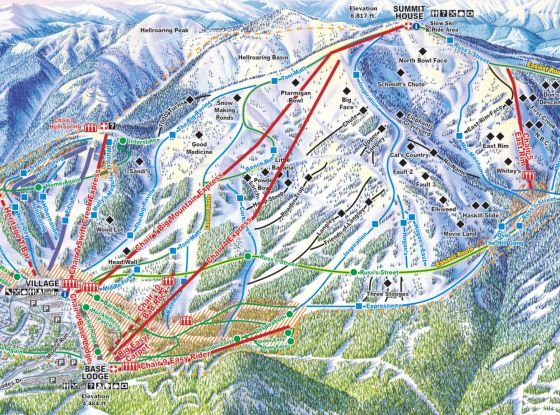 A new detachable quad will soon join the lift fleet at Whitefish Mountain Resort, although the exact timeline is uncertain.  The Chair 4 Express (name TBD) will be the first detachable lift servicing the mountain’s new day lodge, where nearly 70 percent of Whitefish skiers now start their day.  The big lift will replace Great Northern, a Stadeli triple which opened in 1978 but loads higher than the replacement.  The top terminal will be very close to where the old Chair 5 unloaded.

The new lift will open a half hour earlier than the workhorse Big Mountain Express and relieve pressure from the Base Lodge and Bad Rock beginner lifts.  Hourly capacity will be 2,200 skiers, more than double Chair 4 on the rare occasions it is open.  A number of trails will be re-graded to converge at the new load point.  “When people stand at the current carpet lift and look up the mountain when this project is done it will look very different from how it looks today,” says Whitefish.

The resort did not release a timeline or manufacturer although planning is well underway.  Whitefish is already seeking Forest Service approval for its Hellroaring Basin improvement project, which includes two new lifts.  If approved, all three new lifts will be well worth the wait on an already great Big Mountain.

Moving the top terminal across the mountain was… interesting. Lot of skilled people from several companies working towards the same end result. Now in it's new home ready for all the innards to go back together. #beautifulday #liftmaintenance

Now that's what we call a drive shaft, the heavy equipment is being rolled in and on schedule for completion in Decemburrr🚦 We sure can't wait! #FantasticFamilyFun #SasquatchMountain #SMR #GetOutandPlay #construction #hemlockvalley #newblueprogress #mountains #mountainlove #driveshaft #progress #winter

A post shared by SasquatchMountainResort (@sasquatchmountainresort) on Oct 4, 2019 at 1:02pm PDT

Disney Skyliner is transporting guests around Walt Disney World Resort again this morning, eight days after a malfunction caused a few cabins to stack up in the Riviera angle station.  The system has been operating since then but without passengers.  Hours today are 8:00 am to 10:30 pm for all three gondola lines.  New signage reminds riders that Skyliner flights may occasionally be interrupted with stops and delays.  “Following a complete review with the manufacturer, we’ve made adjustments to our processes and training, and we are improving how we communicate with guests during their flight with Disney Skyliner,” a statement from Disney read.  “We again offer our deepest apologies to the guests impacted by the malfunction that resulted in extended operating delays on October 5th.”

According to the Skyliner website, temporary closures will follow this week for “system updates.”  On Wednesday, the Hollywood Studios line will be closed all day while the Epcot and Pop Century/Art of Animation lines will spin from 1:00 pm to 10:30 pm.  Thursday and Friday, all lines will be closed in the morning and open at 1:00 pm.

A new temporary sign at stations indicates that the Disney Skyliner may stop or be delayed “similar to other gondola systems around the world”. pic.twitter.com/Xl4qwlsOjC

Skyliner launched on September 29th, linking Hollywood Studios to Epcot and four Walt Disney World resorts.  Doppelmayr designed and built the lifts and maintains them through its Doppelmayr Cable Car subsidiary in partnership with Disney.  “We greatly appreciate your ongoing patience and understanding, and we look forward to welcoming you back aboard Disney Skyliner,” the theme park operator told guests.