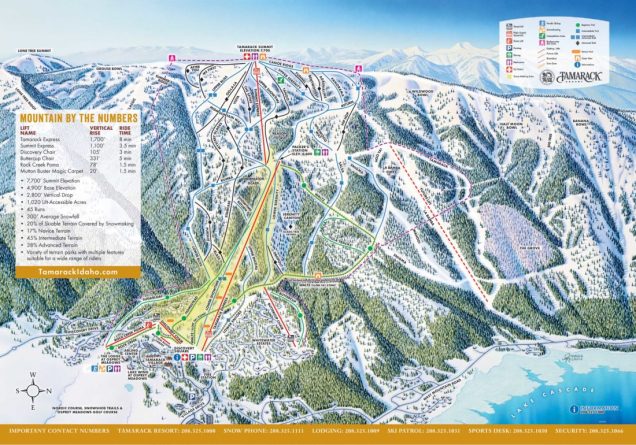 When a group of homeowners banded together to spin lifts at a bankrupt Tamarack Resort in 2010, it was a temporarily measure.  Eight years later, a consortium of investors has finally agreed to take over operations of the 2,100 acre resort and resume development that abruptly ceased in March 2009.  The group, made up of Imperium Companies, MMG Equity Partners and Blue River Family Office Partners, is the same one behind much of the commercial real estate at Blue Mountain, Copper, Mammoth, Snowshoe and Stratton.  It expects to close on the mountain November 30th.

Current Tamarack staff including General Manager Brad Larsen will remain with the resort upon closing.  Industry veteran Jon Reveal will come on board as President of Tamarack Resort Holdings.  “We have been evaluating and working on this agreement for nearly two years to truly understand the history and complexities of the resort,” Reveal said in a news release.  “The partnership strongly believes Tamarack has a tremendous opportunity to thrive as a four-season destination of choice for Idahoans and visitors from across North America.  Our team looks forward to proving our commitment to Tamarack, Valley County residents, Idahoans and all our guests through investment, completion of unfinished projects and improved resort amenities and offerings.”

Tamarack Resort Holdings, a partnership of resort investors & managers, has entered into an agreement to purchase the resort. The future is bright! https://t.co/sychuP22x5 pic.twitter.com/ixYyCDEYEY

Jean-Pierre Boespflug led the investment group that opened Tamarack in 2003, building six lifts over two years along with significant real estate offerings.  Mr. Boespflug’s timing was unfortunate and the resort fell behind on payments for a $250 million loan by early 2008.  The lifts closed on March 4th, 2009 and Tamarack did not open again for a year and a half.  The Tamarack Municipal Association reached an agreement to operate four of six lifts in 2010 and bought assets from lenders for pennies on the dollar in 2016.  Amid the mess, Bank of America repossessed the Wildwood Express lift, which ended up at Brian Head, Utah.  Homeowners were able to purchase and retain the Buttercup lift, which was also underwater but of significantly less value than Wildwood.  At one point four other lifts came close to being sold in a sheriff sale.

Under a lease agreement reached today with the State of Idaho, the new owners commit to either rebuilding or removing the remaining foundations from Wildwood by December 31, 2024 (The Idaho Department of Lands is the landlord in this case rather than the United States Forest Service.)   Imperium Co-Founder Kyle Mowitz says the focus this time will be on the mountain rather than real estate a new Wildwood could come as soon as summer 2019.  Work should also resume next spring on the incomplete Village Plaza and mid-mountain restaurant.  The Osprey Meadows golf course, which was abandoned in 2016 and is partially owned by another party, will take longer to reclaim.

I followed Tamarack’s grand opening with excitement and then watched its downfall with disappointment.  What happened was never about the mountain, which is perfect for a ski resort.  There’s gorgeous Lake Cascade at the base and boundless recreational opportunities in every season.  As a decade went by, I remained hopeful a second chance would come for this remarkable place.  Congratulations to Tamarack employees and homeowners for staying the course through some dark times to get to this new day.

Berkshire Bank of Massachusetts initiated foreclosure proceedings on the Hermitage Club and related properties last Friday, claiming three loans worth $17 million are in default with $16.3 million in principal still outstanding.  The private club, located next to and once part of Mt. Snow, is open and spinning lifts this weekend but it’s not clear how long that will continue.  While the marketing department feverishly posts pictures of fresh snow and smiling children on social media, what happens next will probably be decided in a court room.  No one knows the eventual outcome but recent ski resort foreclosures and bankruptcies offer some insights.

Snow is here and lifts will be spinning! Join us on our mountain this weekend and build some family memories! ❤️❄️❤️ #winter #snowisfalling #youbelonghere #familyfun #snow #childhoodunplugged

END_OF_DOCUMENT_TOKEN_TO_BE_REPLACED

Seventy percent of the 1,277 T-Bars, J-Bars and platter (sometimes called Poma) lifts built in North America to date are no longer in service.  That would suggest the traditional surface lift is a dying breed in the age of beginner-friendly carpets, which go in by the dozen every year of late.  But over the last two seasons, a bit of a renaissance has emerged, with more mountain resorts adding brand new T-Bars and platters.  Four T-Bars being completed right now represent the highest number in North America since 1987.  Even more resorts are considering building these classic surface lifts, although the reasons why have little to do with learning to ski.

Yesterday I visited both Burke Mountain, Vermont and Cannon Mountain, New Hampshire, where local ski clubs recently partnered to build dedicated surface lifts on terrain used for racing.  In some cases, these types of lifts are open to the public but other times not.  New T-Bars are relatively cheap with costs typically covered by donors and/or program fees.  Another reason for this application is speed; every T-Bar built since 2011 can move at least 550 feet per minute, significantly faster than most fixed-grip chairlifts.  The Franconia Notch Ski Club’s new T was built by LST Ropeways and goes up to 690 fpm; Burke Mountain Academy’s nearly-finished one is a Leitner, shown below. 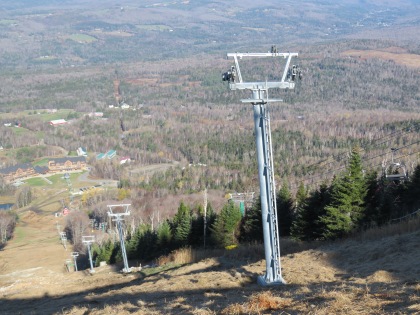 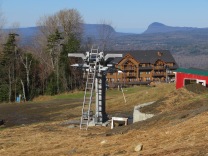 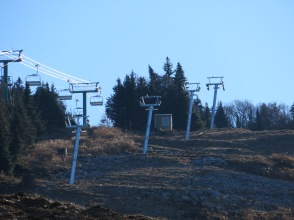 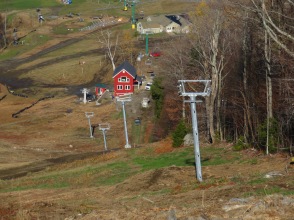 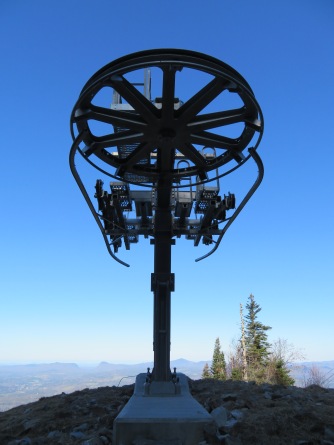