Four American ski resorts will launch major terrain expansions next winter and I got to check out one of them this weekend in Washington State.  New west facing trails at Mt. Spokane Ski & Snowboard Park will be serviced by a new Skytrac triple chair topping out at 5,850′.  The nonprofit that runs the resort initially planned to use Bridger Bowl’s retired Alpine lift but wisely axed that plan last winter and solicited bids for a brand new machine.  At this area once owned by Riblet Tramway Company itself, the last new lift was a double chair that opened back in 1977.  Mt. Spokane’s Chair 1 dates even further to 1956, making it the oldest operating chairlift in the country.  With five Riblet doubles still spinning, a modern galvanized triple is sure to stand out along with the new runs. 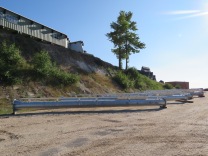 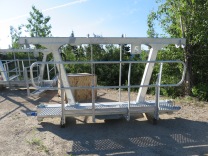 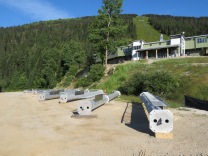 A growing demand for skiing has led to many new lifts at competing resorts in the Selkirk Mountains during the 14 years it took for Mt. Spokane’s expansion to be approved.  In the nearby Idaho panhandle, Schweitzer Mountain Resort plans to build two new lifts on its backside next summer, Lookout Pass is eyeing another two and so is 49 Degrees North in northeast Washington.  Just across the Canadian border, Spokane favorite Red Mountain hopes to complete the Topping Creek T-Bar this fall.

Back at Mt. Spokane, Skytrac has arrived and lift work will begin in earnest August 1st.  That is one year to the day since the Washington State Supreme Court upheld approval of the expansion in a 5-2 vote.  Crews commenced cutting the four new trails the very next day and the northernmost one is now ready for its new lift.  Many rebar cages for towers are already on the hill and all 17 steel towers have arrived from Salt Lake.  Chair 6 will be the largest new Skytrac this year in a roster that also includes lifts in California, Utah, North Dakota and Labrador, Canada. 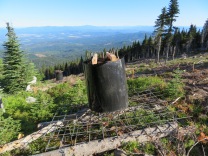 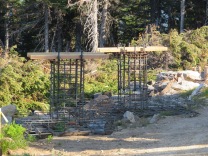 The $4.1 million backside project is being financed through a $1.7 million loan from Washington Trust Bank.  The resort may receive an additional loan from the United States Department of Agriculture and will raise the rest through private donations and operating revenues.  The 279 new acres will open as soon as snow permits and I have a feeling Chair 6 may not be the last Skytrac at Mt. Spokane.

9 thoughts on “All Systems Go for Mt. Spokane’s Backside Expansion”