The only regular venue for World Cup alpine racing in Canada is Lake Louise, which also happens to be among the most naturally scenic places one can ski anywhere.  Louise is one of three ski resorts located in Banff National Park along with Sunshine Village and Norquay, which are also considering making major lift investments in the coming years.  Lake Louise hopes a proposed reduction in overall acreage will allow it to add up to nine new chairlifts along with other improved amenities over the next 15 years.  Even though the resort’s permitted boundary would decrease from 5,400 acres to approximately 4,100, comfortable carrying capacity would increase from 6,000 to 9,000 skiers per day.  “The new plan focuses on enhancing terrain, facilities and services for all visitors, during all seasons, and will lead to a better visitor experience,” the project website notes.  “It will allow us to continue to protect local sensitive areas and species, while advancing environmental awareness and conservation goals for future generations.”

Like at other large mountains with only one portal, out-of-base capacity is a problem.  At Lake Louise, it was compounded by the retirement of Olympic without a direct replacement in 2004.  The four person, Leitner-built Glacier Express would be rebuilt as a six place lift.  A new Juniper high speed quad is proposed load near Olympic and service three new beginner trails.  Another new lift called Meadowlark would board near the Grizzly Express Gondola with detachable quad chairs.  These improvements would bring out-of-base capacity to 9,000 skiers per hour, almost double the current level.

Another high speed quad called Upper Juniper would relieve pressure from the Top of the World Express.  Summit Platter would be removed and replaced with a fixed grip chairlift in completely a new alignment with wind exposure in mind.  The new lift would load at the Top of the World and unload higher near the true top of Whitehorn Mountain.   Also on the upper mountain, a new Eagle chairlift would replace the retired Mueller double with a detachable quad and ease pressure on the gondola.  Sometimes ski resorts go in circles!

The Sunny Side beginner zone would be expanded uphill.  The T-Bar that operated for decades here was removed in 2012, owing to not serving today’s beginners very well.  Up to nine conveyors could eventually inhabit the Whiskey Jack base area, which might be a record! 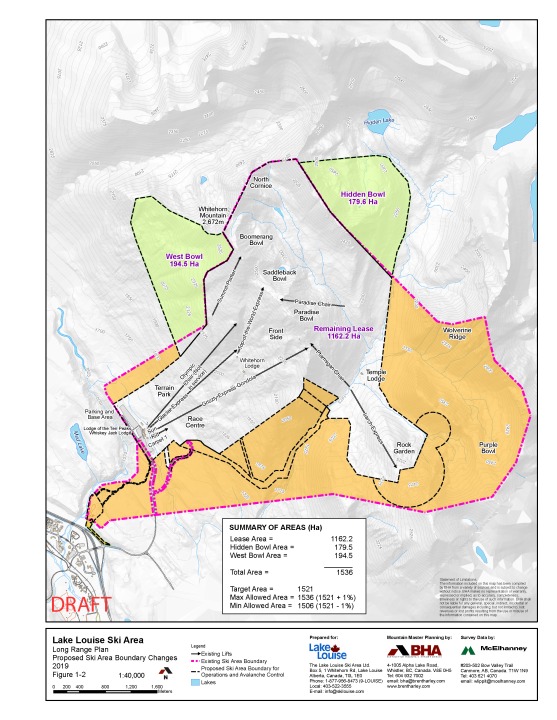 The long proposed Richardson’s Ridge detachable quad would service five new beginner and intermediate trails plus new glades on the back side of the mountain.  A short surface or chair lift called Prunepicker would connect guests from Temple Lodge to the Richarson’s lift.  The once proposed Wolverine Ridge Express is now eliminated from consideration but new terrain is envisioned in West and Hidden Bowls.  Neither of these above treeline areas would include new lifts.

A 60 day public comment period is now open with a deadline of June 15th.  Parks Canada and Lake Louise Ski Area Ltd. held three open houses this week and you can also submit comments about the plan online.