When the family that operates Timberline Lodge & Ski Area bought nearby Summit Ski Area last year, an interconnect immediately entered the realm of possibility.  The Forest Service recently accepted RLK and Company’s new Summit Master Development Plan, which includes a 10 passenger gondola from the Summit base area in Government Camp to historic Timberline Lodge.  The combined resort would feature a vertical drop exceeding 4,500 feet, longest in the United States with all lifts open. 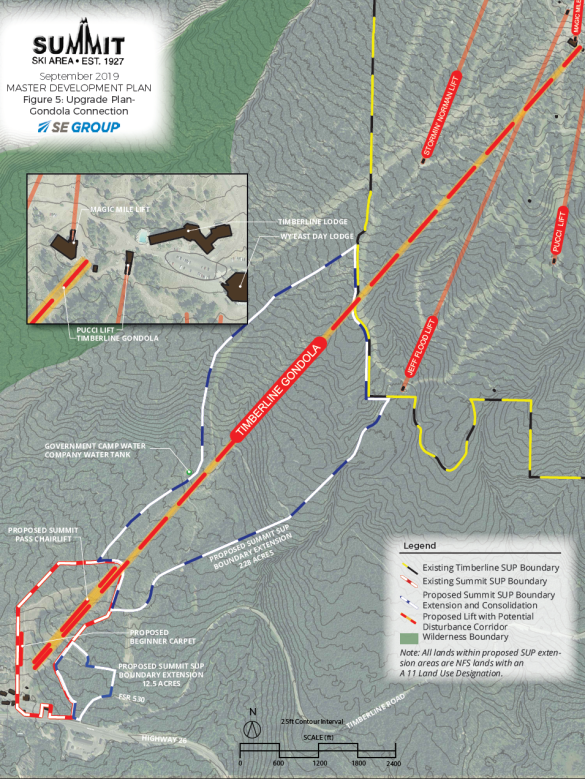 A Timberline Gondola would span 12,952 feet with a vertical ascent of 1,890′.  It would require a boundary expansion of 228 acres between the top of Summit’s Homestead double chair and the bottom of Timberline’s Jeff Flood Express.  Importantly, the Summit base area would become a transit and parking hub for both mountains, reducing congestion and parking demands at higher elevations.  An approximately 30,000 square foot base lodge would replace the existing one at Summit.  Guests from Portland would save almost 12 miles of driving each day, instead enjoying an 11 minute flight from Government Camp to the base of Timberline’s Magic Mile quad.  “The gondola would not only provide direct, aerial access to Timberline from the Summit’s base area, for both guests and employees, it would also alleviate the congestion on Oregon Highway 173 and re-prioritize the need for additional parking at the bottom of Timberline’s Molly’s Chairlift,” notes the master plan, which was prepared by SE Group.  The gondola would travel up to 1,200 feet per minute with a capacity of 2,400 passengers per hour in each direction.  It would operate approximately nine hours per day in both winter and summer, serving skiers, snowboarders, sightseers and mountain bikers.

Additionally, the plan prescribes replacing Summit’s 1980 Riblet double with a fixed grip quad called Summit Pass.  This lift would parallel the gondola for 1,933 feet and terminate at 4,290 feet in elevation.  “By upgrading the existing chairlift conveyance, the overall guest experience would improve by having updated lift technology, allowing ski school and parties of four or less to ride the chairlift together,” the plan notes.  Capacity would increase from 1,200 per hour to 2,000.  A new carpet lift would also be installed.

The Forest Service’s acceptance of the master plan does not constitute approval of individual projects and, if approved, gondola construction is likely still years away.  Timberline’s immediate next lift project is set to be a detachable replacement for Pucci, benefiting beginner and intermediate skiers.  The gondola link would be even more impactful with major environmental and guest service benefits year round.