This week’s construction update comes from northern Colorado where Steamboat Resort is in the midst of replacing a fixed-grip quad with a UNI-G detachable.  The Elkhead Express will be Steamboat’s first Doppelmayr lift built since 1997 after three new Leitner-Pomas in a row. Nearby Vail went the other way this year, switching from Doppelmayr back to L-P.  Elkhead Express is the third lift in its location following a 1972 Heron-Poma double and later a Lift Engineering quad.  The not-that-old Yan has been carefully disassembled and will undoubtedly find a new home somewhere down the road. 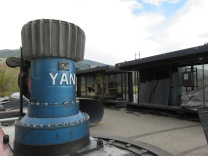 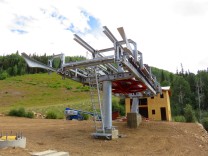 The new Elkhead will only have around ten towers; the old lift had 13.  The Doppelmayr crew has finished concrete and set the big steel with a crane at both terminals.  Tower footings are ready to go but I couldn’t find any of the towers laying around yet.  The stations will be blue and white with red stripes and are sure to look sharp.  Compared with the UNI-G terminals going up in Jackson and Big Sky, Elkhead’s stations are noticeably smaller.  Like all of Steamboat’s detachables, Elkhead Express will have a deluxe indoor maintenance bay attached to the bottom terminal.  Steamboat’s eighth detachable lift will be ready to go by Thanksgiving.