Once again in 2016, Seattle found itself the fastest-growing big city in America, and the only one of the top five in close proximity to major mountain resorts.  The Seattle-Tacoma-Bellevue metro area is now home to 3.8 million people, seven figures more than metro Denver or the Wasatch Front and growing faster than both.  Yet despite being generally outdoorsy and with high average incomes, Puget Sound residents have only three real choices for where to spend a day skiing.  Unlike in neighboring Oregon, where three resorts flank Mt. Hood and another Mt. Bachelor, Washington’s large volcanoes never saw ski development before being placed under conservation.  Most of Washington State’s ski areas lie far from Puget Sound, along which two-thirds of Washingtonians live, concentrating some 1.5 million skiers annually at The Summit at Snoqualmie, Stevens Pass and Crystal Mountain.

Crystal spun off from Boyne Resorts in April to become Seattle’s only locally-owned and operated mountain. The resort’s master plan includes new lifts but most of them have already been built.  Michigan-based Boyne still operates The Summit at Snoqualmie, just 45 minutes from Amazon’s new 24,000-head complex in Downtown Seattle.  The Summit’s approved plan includes a dozen new lifts but almost all of them simply replace very old ones.  That leaves the place where I first rode a detachable chairlift in 1997, Stevens Pass, to meet much of the Puget Sound region’s growing demand for local skiing.  As the second busiest resort in Washington, Stevens averages double the skier density of Crystal and Snoqualmie.  Located along U.S. Route 2, Stevens Pass grew under the ownership of Seattle-based Harbor Properties, which also at one point held Mission Ridge and Schweitzer.  In 2011, Harbor sold Stevens to CNL Lifestyle Properties with operations assumed by Karl Kapuscinski of Mountain High, California.  Stevens saw one new lift during CNL’s tenure, a Doppelmayr detachable in Mill Valley called Jupiter Express.

Feb 04, 11:55AM: All parking lots are full. No parking is available at this time. We apologize for the inconvenience.

Jan 21, 10:42AM: All parking lots are full. No parking is available. Spots should start to open around 2pm. Sorry for any inconvenience.

Jan 15, 12:33PM: All of our lots are now full. We expect spaces to start opening up in the summit lots within the hour.

Dec 30, 10:29AM: All parking lots are full. No parking is available at this time. Spots should becoming available around 1:30PM.

As the 2007 Stevens Pass master plan notes, “demand for skiing facilities currently exceeds capacity both on the trails, on the lifts and in the base area.  A a result, Stevens Pass frequently experiences days when these facilities are overcrowded, resulting in the use of satellite parking, long lift lines, lack of seating and a shortage of restrooms.” The introduction concludes by noting Stevens has been over-utilized every year since 1995. But with its ambitious upgrade plan approved in 2015 and new stability following the sale of CNL’s ski holdings to hedge fund Och-Ziff last fall, more lifts and less crowding are on the horizon.

The second oldest chairlift at Stevens is called Brooks, and serves terrain parts to the west of the Skyline Express.  A 2012 amendment to the Stevens MDP identifies three new options to replace this Riblet.  A shorter, terrain park-specific triple would be relatively affordable but a longer high-speed quad would better serve the growing Stevens Pass Bike Park, advanced skiers, and those heading to the Grace Lakes Expansion (more on that later.)  Another option is to simply move one or both existing terminals to create a shorter terrain park lift.  I don’t see much value in significantly modifying a lift that is about to turn fifty and hope they go with a high-speed quad. 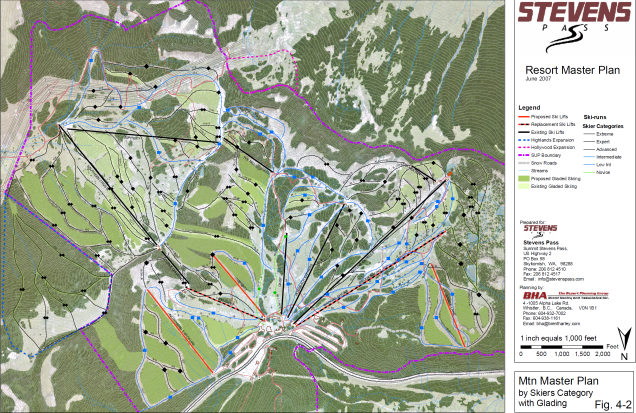 Daisy is another beginner and low intermediate chair leaving from the main base area that was built in 1973 by Thiokol.  Stevens plans to replace it with a realigned fixed-grip triple or high-speed quad chair.  The fifth oldest lift in Washington is nearby Kehr’s chair, a Riblet opened in 1964.  This one is slated to be swapped for a new fixed-grip triple, quad or possible high-speed quad to the bottom of Double Diamond.

Excitingly, Stevens Pass has approval from the Mt. Baker-Snoqualmie National Forest to add three completely new lifts within and beyond the current ski area boundaries.  To the west of Skyline and Brooks lie the Grace Lakes, where a new quad chair will serve up to 540 skiers at a time on 80 new acres.  Much of this area would be naturally gladed for intermediate and advanced skiers and snowboarders.  An even larger addition called Northern Exposure would add a detachable quad and stage skiers out of the eastern parking lots with six new trails.  As the MDP notes, “Northern Exposure is more than an extension of the existing trail network.  It would be a new direction, a contrast, providing an attractive alternative to the traditional offering at Stevens Pass.”  A triple chair called The Katz could serve a third, smaller new pod between Daisy and Kehr’s.

Northern Exposure seems likely to be built before the other two expansions with its mix of benefits and trail capacity of 610 new skiers at one time.  With three lift replacements and three all-new lifts, Stevens Pass would gain 350 additional acres of developed skiing and a comfortable carrying capacity of 7,480, up from 5,670 today.  Perhaps Stevens’ biggest challenge is addressing its parking and transportation woes, something that every Cascades resort struggles with.  If Stevens can figure that part out, the expanded ski experience will rival the best in the region.

14 thoughts on “In a Booming Region, Stevens Pass Looks to Expand”