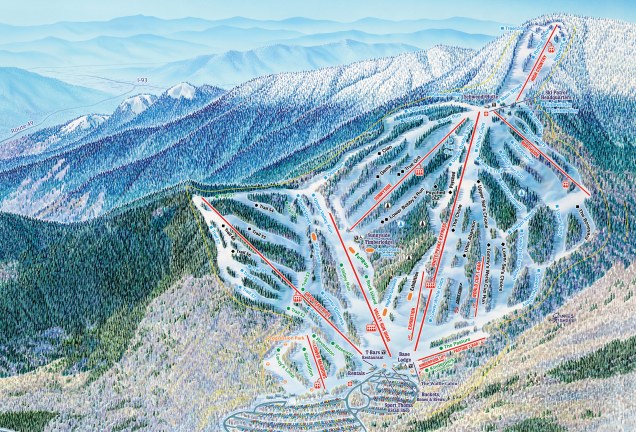 A gondola may finally link the Town of Waterville Valley with its ski area in the coming years, just one of many exciting projects outlined in the new Waterville Valley Master Development Plan.  Recently accepted by the United States Forest Service, the MDP will guide upgrades at the mountain over the next decade.  It’s the first such comprehensive plan for Waterville since 1999, when Booth Creek owned the resort.

Waterville is seeking a 140 acre boundary expansion and 15 new trails on Green Peak, which saw its first lift installed in 2016.  The resort now features two summits accessed from one base area.  A proposed new portal would separate different user groups and improve the guest experience.  A two stage gondola or chondola is planned to link the Waterville Town Square to the new base area and on to Green Peak.  Two sections would be capable of operating independently with an angled mid-terminal.  The exact alignment of the first stage, which would be located on private land, has not yet been determined.

“The most remarkable element of the plan is that it includes the eventual installation of a gondola that will start in the Town of Waterville Valley near Town Square and transport guests to the summit of Green Peak,” said Waterville Valley CEO John Sununu.  “Connecting our pedestrian village to the ski resort will be incredibly exciting for our resort and community.”  The gondola would be a major undertaking, spanning some 9,000 linear feet with 1,400 feet of vertical and eight passenger cabins.  It would operate in both winter and summer. 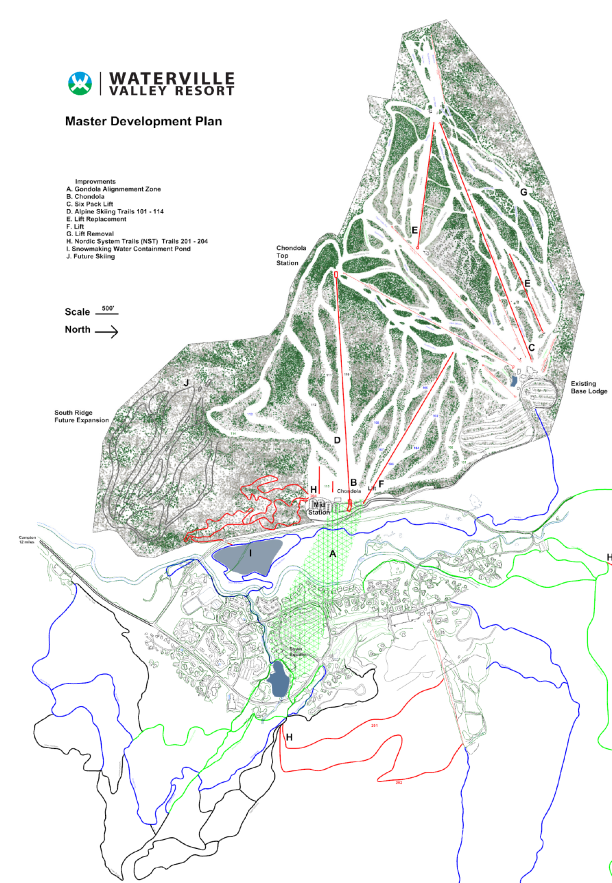 Green Peak would also see a second triple chair servicing 500 vertical feet of beginner and low intermediate terrain.  Two conveyor lifts in the existing base area would be relocated to a new ski school facility at the gondola mid-station.

Two lift upgrades are planned, which Waterville filed to construct back in October.  The White Peaks Express, nearing the end of its useful life, would become a six place detachable in the existing alignment.  Sunnyside is targeted to be replaced with a fixed grip quad.  Two other lift modifications are included: removal of Northside and lengthening of the World Cup T-Bar.  Outside of the scope of the new development plan but on the horizon is further expansion onto Green Peak’s South Ridge.

“We’re thrilled to continue Waterville Valley’s development and look forward to fulfilling our team’s vision,” said President and General Manager Tim Smith in a statement announcing the Forest Service acceptance. “This is just the first step in a long process, but it marks an exciting milestone towards progressing Waterville Valley into the future.”

15 thoughts on “Waterville Valley Eyes Terrain Expansion and a Gondola”