I got to check out the Rafferty lift construction at Snow King Mountain this weekend.  This project is on track to be Doppelmayr USA’s fastest lift installation ever. Snow King actually sells more alpine slide rides in the summer than they do ski tickets in the winter so the lift needed to be completed quickly in between seasons.  Construction began in April and will be done by June 15th.  Snow King is also building a Wiegand Alpine Coaster that will open in August.

The old Rafferty was a Hall double installed in 1978.  It will find new life at the Bearizona Wildlife Park in Williams, Arizona.  The new Rafferty quad goes 400 vertical feet higher than the old one but the load- and mid-stations are pretty much in the same spots.  The bottom drive-tension terminal is a brand new design from Doppelmayr called the Alpen Star.  It is a single-mast terminal that looks a lot like SkyTrac’s Monarch design to me.  Check out more pictures below of this $8 million project. 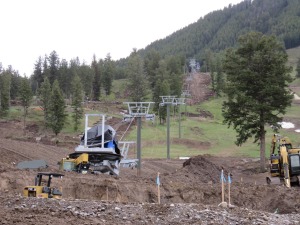 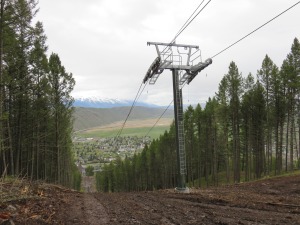