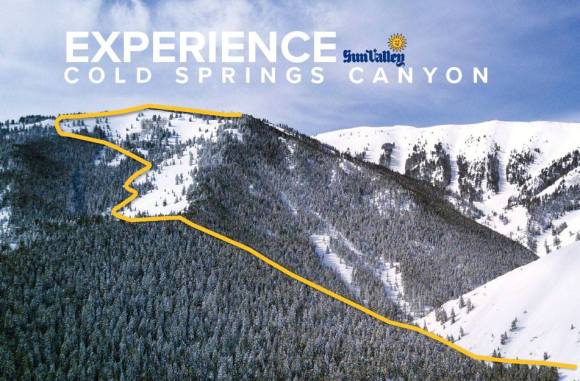 Sun Valley Resort plans to replace its oldest chairlift with a new, longer high-speed quad and open 380 acres of Cold Springs Canyon to skiing in 2018.  A future plans webpage launched today details the planned expansion within Bald Mountain’s existing permit area on Bureau of Land Management and National Forest lands.  North-facing terrain in Turkey Bowl and Cold Springs Canyon would be gladed with an extended Lower Broadway run leading to the bottom of a new detachable quad chairlift.  South-facing terrain underneath the lift would also be opened when conditions permit.


The new high speed quad is slated to replace the Cold Springs double, a Yan/Riblet hybrid that dates back to 1970.  The new chairlift would be nearly twice as long and rise 1,550 vertical feet, up from the current 1,069′.  Ride time would still decrease from 6.7 minutes to 6 minutes with a top terminal moved closer to the Roundhouse Gondola.  After the upgrade, Bald Mountain would have only two fixed-grip chairlifts remaining – Mayday and Lookout – with two more left on Dollar Mountain.
Sinclair Oil Corpration, the 82nd largest private company in the United States, owns the Sun Valley Company along with Snowbasin and both resorts are longstanding Doppelmayr customers.  Sun Valley has already submitted the Cold Springs lift replacement and associated projects for approval as an amendment to the 2007 Bald Mountain master plan.  An open house will be held on Friday, March 31st at the River Run Day Lodge with representatives from the Sawtooth National Forest and BLM in attendance.  If project scoping and approval go as planned, the new lift and runs could open in late 2018.