For the first time since their journey across the Atlantic, Jackson Hole’s newest gondola cabins slept inside last night.  With a parking and storage facility officially commissioned at Sweetwater‘s Solitude Station, 48 luxury vehicles that cost tens of thousands of dollars each now have a world-class home that brings together the latest lift technology with proven principles.

Jackson Hole Mountain Resort opened its Bridger Gondola barn in 1998 and 84 cabins have been going inside for twenty years there.  The CWA X models are in incredible shape for their age and number of hours, a testament to their quality construction, dedicated maintenance staff and indoor storage.

JHMR launched gondola number two in December 2016 and its CWA Omega IV cabins remained on the line continuously until yesterday.  The winter of 2016-17 proved to be a monster in the Tetons and while the cabins performed well, fifty feet of snow often turned to ice on flat roofs.  Frozen chunks would bounce up and down, making sounds that mimicked falling metal.  Jackson Hole sometimes goes weeks or even months without a thaw and ice would also accumulate on the cabin floors and in ski racks (other fun liquids would freeze too!)  Ice storms that can cripple door mechanisms and plague detachable grips thankfully never materialized last year and the days of worrying that storm would come are now over.

Construction began on the new parking facility as soon as the gondola closed last April and was completed just a few weeks ago.  Teams from Doppelmayr installed the rails and switches that hang from the second floor ceiling and wired the cabinets and controls to make it all work.  The new building also houses a mountain sports school locker room, break room and restrooms.

Parking at an intermediate station is unique but not unheard of; the WhistlerVillage Gondola has a mid-station parking and the new Blackcomb Gondola will too.  At Sweetwater, cabins come out the side of the Uni-G station at a 90-degree angle and transfer to a chain conveyor that brings them into to the barn.  The mid-station is composed of two Uni-G-Ms and the parking split occurs between the last downhill deceleration tires and the door opening rail, meaning anyone who boards at the drive station after last cabin is in for a sweet ride through the barn!

The new system is similar to the Poma one at Bridger with some nice upgrades.  Both utilize tire elevators at the beginning to raise cabins a few feet and the remaining rails gradually descend.  With gravity doing most of the work, lift staff help cabins around corners and prevent them from colliding too quickly.  Many people don’t realize the black bumpers on the corners of Omega cabins have clever handles hidden inside for the dozens of human hands which often touch a gondola before skiers arrive each morning.

Sweetwater has six parking rows for up to 62 cabins, though we only have 48 right now.  There are three grip maintenance bays that branch off from the first row.  Currently the work carrier is in one bay, a cabin with our first broken window in another (sometimes gondola cabins break and it’s nice to now have a place to repair them.)  One of those bays has a floor-to-ceiling garage door in case a cabin ever needed to be completely removed onto a trailer.  The back of the barn also has offices for the growing gondola maintenance department.

Sweetwater’s parking system seamlessly interfaces with the lift.  We can park and feed at 3.5 m/s but if the lift speed changes, the conveyors and tires adjust to match.  Numerous parking stop buttons located throughout the facility also stop the lift outside.  Bridger’s system is comparatively old school and the lift and barn don’t talk to each other, requiring more staff.  One disadvantage of Sweetwater’s setup is you cannot park and feed cabins at the same time because the park and feed rails share the same tunnel (we sometimes park and inject simultaneously at Bridger, which is pretty wild.)  Sweetwater is half as long as Bridger, however, and the entire line can be parked or launched in about 20 minutes. 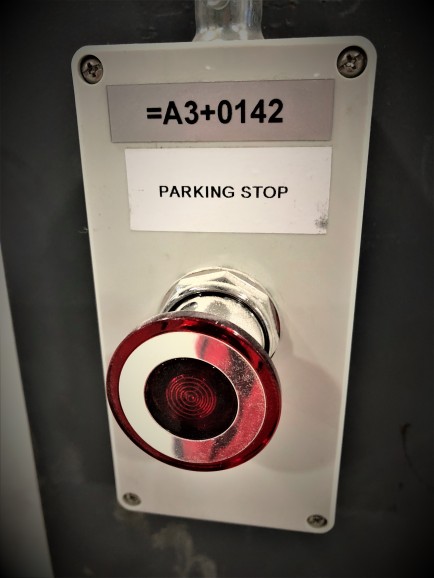 We plan on leaving three cabins on at night to transport workers to the base and, perhaps more importantly, bring them back up in the morning.  Would-be cabin pushers hop out at the mid-station on the uphill side and have about ten minutes to get ready before the three cabins make it back down and into the barn.  Once the line is clear, a second chain conveyor is started to launch cabins into the downhill side of the terminal.  One person roughly spaces cabins into the conveyor and a clutch at the end automatically adjusts the spacing.  The sound of the feed conveyor stopping and then advancing a waiting cabin at just the right moment is magical! 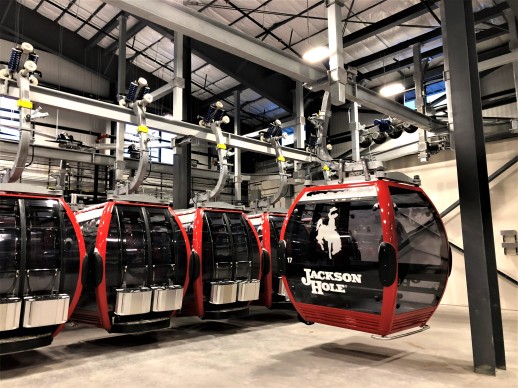 Advantages of the serpentine setup are cabins stay in numbered order and we rarely have to run the lift in reverse.  Other parking setups use dead end rows and feed with the lift running backwards.  Like everything in the lift world, there are advantages and disadvantages to both concepts.

Many American gondolas have limited parking and we feel extremely lucky to now have two of the finest facilities in the country.  Over the next decades, the significant investment at Sweetwater should prove worthy time and again.

21 thoughts on “Inside the Sweetest Parking Around”