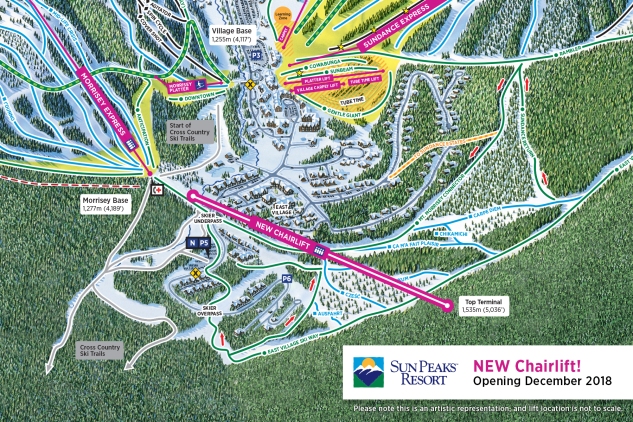 Canada’s second largest ski resort near Kamloops, British Columbia today unveiled plans for its tenth lift, a $3.1 million fixed-grip quad chair above the East Village.  The new lift will complement Sun Peaks’ existing Morrisey Express with its bottom terminal located nearby.  It will then cross the Sun Peaks road and climb over existing ski terrain with a top terminal above the East Village Ski Way.  “This lift project is especially rewarding to announce today. Better access from the East Village is vital to our overall experience and future success,” said Darcy Alexander, Vice President and General Manager of Sun Peaks in an early morning press release.  “The new lift is something we are really pleased to add to the mix for next winter and it will greatly enhance our industry leading ski-in ski-out design”

The specific run layout is currently in development but will see a green trail option to the village from the top of the lift consistent with all other resort lifts and a well-known element of the Sun Peaks ski experience.  Additionally, the lift will provide improved access to some of the most underrated and underutilized ski terrain with family-friendly blue runs and pockets of glade skiing.  New chairs will also be added this summer to the Sundance Express for a 30 percent increase in capacity as part of an overall $47 million capital plan for 2018.  No manufacturer was named for the new quad but Sun Peaks is currently an all-Doppelmayr mountain and a wholly owned subsidiary of Nippon Cable, Doppelmayr’s longtime partner in Japan.