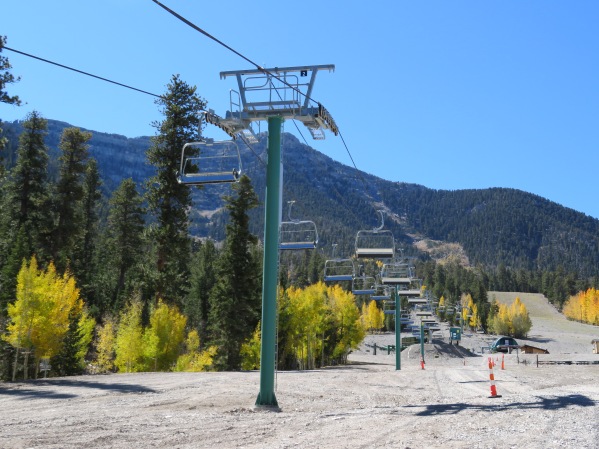 Well over two million people in the Las Vegas region have just one ski resort within day trip reach, a unique situation among western US metros.  The mountain is Lee Canyon, which operates three fixed-grip chairlifts on 785 acres flanking Charleston Peak.  On Wednesday, the Forest Service published a 219 page Draft Environmental Impact Statement for a major expansion and upgrade plan developed by longtime owner Powdr Co.  Two alternatives would each add a pair of fixed grip quads and two new carpets lifts while a no action option would see the resort remain within the operating footprint it has since 1967.

Goals of the expansion are to update and renovate ski area infrastructure, balance lift and trail capacity, meet growing demand from Las Vegas and the surrounding area and expand year-round recreational opportunities.  The proposed Chair 5 pod would become the next step up from the Rabbit Peak bunny hill, providing beginners and low intermediate skiers the opportunity to transition to a chairlift and ski a variety of longer green runs. Chair 5 would be an 1,800 person-per-hour fixed-grip quad chairlift with a loading conveyor. The lift would be 1,400 feet long, with a vertical rise of 310 feet. It would be a top drive lift with approximately 7 towers.  In order to access the Chair 5 bottom terminal, a new 500 foot conveyor, Lift 6, would be installed from near the bottom terminal of Chair 3 to near the bottom terminal of Chair 5.

Similar to the existing Chair 2, Chair 8 would be a step up in difficulty from Chair 5, accessing mostly intermediate runs with some easier and some more difficult terrain within that category. It would be a fixed-grip quad chairlift with a capacity of 1,800 pph, 2,200 feet long, with a vertical rise of 650 feet. It would be a bottom drive lift with approximately 16 towers.  With alternative 2, the lift would be shortened to load higher up.  Other proposed improvements in both alternatives are new biking and hiking trails, a new skier services building, another parking lot, expanded snowmaking, a zip tour and mountain coaster.

Now is the time for your input. The 45-day public comment period has begun.

Public comments on the proposal are being accepted by emailing leecanyoneis@fs.fed.us through October 1st.  The Forest Service anticipates reaching a decision around the end of the year with implementation possible as soon as spring 2019.  Lee Canyon says the new trails, parking lot, rental/food & beverage building and first aid/ski patrol building are likely to come first with the lifts, trails and snowmaking to follow if approved.

Powdr Co. is in the middle of a broad capital program across its ski resorts with six new lifts going up at Boreal, Copper Mountain and Killington this fall.  The privately-held company is set to build at least two new chairlifts next year in advance of Lee Canyon’s possible expansion.