A rainbow shipment of CWA cabins is now stateside, earmarked for the skies above Central Florida.  Construction continues on the three line Disney Skyliner system, which is set to open this fall and sure to become a showcase for high capacity lift technology.

In addition to the row of cabins now staged at the Caribbean Beach hub, cabins have also been spotted in the Epcot, Hollywood Studios, Pop Century and Art of Animation stations.  While the gondolas are covered in protective wraps, you can see they come in a variety of colors with Disney character art on the windows.

Storage was bare 4 days ago, as seen in this aerial. pic.twitter.com/SlXdxL3NKi

There are interesting looking electrical boxes on the cabin roofs.  I’m curious to see what sort of infotainment the Skyliner carriers feature, if any.  It does not appear that power is derived from solar panels, as is the case with some other urban gondolas.

Construction lighting at Disney Skyliner Epcot station. Note the yellow nylon ropes, these will pull a light wire rope through. Then the thick Gondola rope will be pulled through. pic.twitter.com/NALdDKedqt

All three haul ropes are now pulled and spliced.  Work carriers have been spotted traversing between parks by cable in recent weeks.

Epcot side of the Disney Skyliner turn station is strung both directions with gondola-bearing wire rope. pic.twitter.com/2jYZIjnDaw

Nylon ropes at turn station in the Riviera-Epcot line of Disney Skyliner. pic.twitter.com/qwEZBrDrUy

Aerial view of the Disney Skyliner turn station in the Epcot-Riviera line. Arrow at nylon ropes being used to pull wire rope through the system. pic.twitter.com/ctUxl2nDrE

Aerial view of the turn station in the Disney Skyliner Riviera-Epcot line. pic.twitter.com/buZRKN2VfF

At center of this aerial is the Epcot Resorts Speedway station. Zoom in and you can see nylon rope connecting Disney Skyliner towers through the turn station of the Riviera-Epcot line. pic.twitter.com/yc6pIufiNT

On Tuesday, Disney released concept art for the Riviera Resort station, the only one of six boarding locations we hadn’t seen a preview of yet.  “Disney’s Riviera Resort is inspired by Walt and Lillian Disney’s travels throughout Europe and the Mediterranean coastline —from France to Italy,” said Terri Schultz, senior vice president and general manager of Disney Vacation Club in a blog post. “Walt fell in love with European art, architecture, food and stories, and his extended tours of the region continue to influence Disney storytelling and theming. We look forward to welcoming our members and guests later this year to this new resort inspired by Europe and imagined by Disney.” 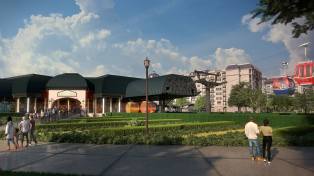 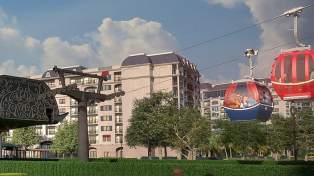 Artwork was recently added to the ends of the angle station to make it fit with the theme of the resort.  Riviera opens December 16th, 2019, a few months after the Skyliner debut window.  There’s a chance cabin doors stay closed at this station for the first few months of Skyliner operation.

Significant construction work continues around the Caribbean Beach station, where cabins will be stored and launched for all three lines and passengers will make connections depending on their destination.

Aerial view of some of Disney's Caribbean Beach Resort and Epcot. At lower left is the central station of the Disney Skyliner system. pic.twitter.com/Zb4Ecda85D

Aerial showing rope in all three lines of the Disney Skyliner system, at the Caribbean Beach station. pic.twitter.com/Ie5UBDq1jj

Seems like a bus stop is being built next to the Disney Skyliner Caribbean Beach station. Guests would take the internal resort bus to a stop closer to their rooms. pic.twitter.com/Z7ytUCzIDD

The two parking areas appear to be at least partially automated with sets of tires visible along the rails.

Wiring strung in the center of the Disney Skyliner DHS route. pic.twitter.com/3kc74tRe7A

Hollywood Studios station is almost finished and the plaza around the terminal is now open to the public.  The surrounding landscaping looks amazing for a glorified ski lift!

Aerial view of the Disney Skyliner and the Pop Century / Art of Animation station. pic.twitter.com/LevcLV5koO

The Hourglass Lake station is also nearly complete and looking sharp with its blue hue and wavy accents.

Aerial view of the Disney Skyliner Station between Art of Animation and Pop Century resorts. pic.twitter.com/pQw4Oqsf8C

With the arrival of cabins, I expect to see some colorful objects in the Disney World sky very soon!