This year saw installation of 43 new and 7 used lifts across North America, numbers similar to the last two seasons.  43 may seem like a modest number for newly-manufactured lifts on an entire continent but that number is a 54 percent increase from the start of the decade and the highest single year total since 2004.  Only seven resorts opted to install used lifts, mostly late model fixed grip chairlifts but also a detachable quad and one T-Bar. 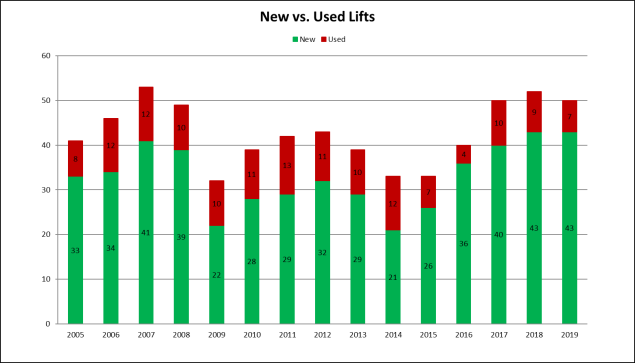 While 2018 saw a record number of gondolas, multiple bubble chairs and a Telemix, 2019’s projects trended smaller with 22 fixed grip chairlifts and five surface lifts.  That’s the most platters and T-Bars built in the last 15 years.  Two of them anchor terrain expansions while another two service youth racing programs.  Loading carpets were included on five new fixed quad lifts, allowing them to run at slightly faster speeds.

After two huge years, gondola construction fell to two new installations in Colorado, one in New Hampshire and pulse versions in New York and Florida.  Detachable chairlift construction was just above the decade average of ten per year.  Only one of this year’s high speed chairlifts included bubbles and another heated seats.

Over 40 percent of this year’s lifts were in new alignments rather than direct replacements for aging machines.  That indicates a confidence in the overall economy and demand for travel following a great winter in 2018-19.  On top of the expansions and additions, 29 lifts were replaced at an average age of 40 years. 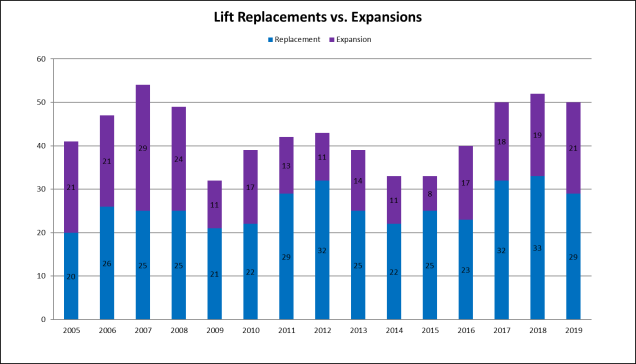 The lift companies continued to sell to other businesses besides ski resorts in 2019.  The stadium the Miami Dolphins call home now sports a pulse gondola with glass floors set to open just before the Super Bowl.  A pulse gondola from Colorado reopened as the Grafton SkyTour, a combination lift along the Mississippi River.  There were also some non-traditional but still snow related projects, ranging from a surface lift at a military training site to a quad chair at a terrain park-only mountain and gondola to the ski jump in Lake Placid.

As usual, the Rocky Mountain states racked up the most new lifts, led by Colorado with seven and Idaho at a surprise five.  Schweitzer in the panhandle region completed a major realignment in Outback Bowl with a new Leitner-Poma detachable quad and Skytrac fixed grip triple.  Bogus Basin, Lookout Pass and Tamarack Resort also undertook significant projects in the Gem State.

A dozen lifts were added in the East with four each in New York and Vermont.  New Hampshire got its first eight passenger gondola, the Bretton Woods Skyway. 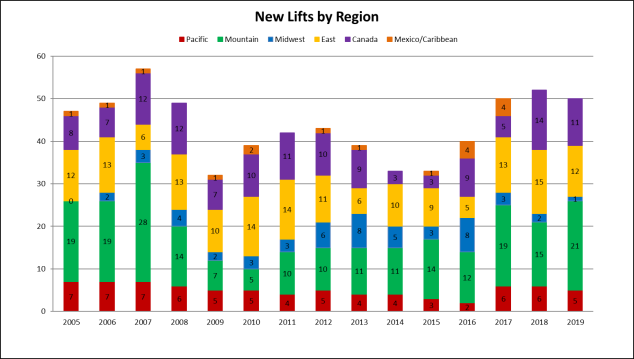 Midwest ski areas sat completely out for new lifts, focusing on other projects in 2019.  The Pacific region wasn’t far behind with three new lifts in Washington and only one apiece for California and Oregon.  By contrast, Canadian resorts invested heavily coast to coast, with four additions in British Columbia, four more in Quebec and three in Ontario.  In keeping with this year’s theme, all but two of Canada’s projects were fixed grip designs.

Four manufacturers completed brand new lifts while a fifth, SkyTrans, moved and modified the Glenwood Caverns gondola for Grafton.  Partek’s lone lift went to West Mountain, a repeat customer.  Otherwise 2019 was a story of the big two if you count Skytrac and Leitner-Poma as one company.  Many of this year’s Skytrac lifts utilized Leitner-Poma sheaves and projects at Schweitzer, Ski Cooper and Copper Mountain were team efforts between the two branches.  Of the Leitner-Poma Group’s fixed grip chairlifts built in 2019, five were Leitner-Poma Alpha models while five were Skytrac Monarchs.  On the detachable side, the company completed its first LPA angle station with an innovative double-grooved bullwheel design at Alpine Meadows. 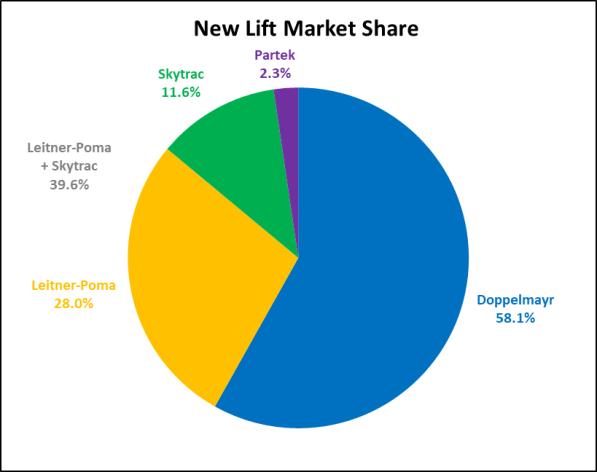 Doppelmayr is on a roll with nearly 50 lifts delivered in North America over the last two years.  The company utilized the new Doppelmayr Connect control system on almost all its 2019 projects and introduced a modern operator house design this year.  While no North American detachable customers opted for D-Line lifts in 2019, Boyne Resorts recently signed for a second such lift.  More projects in Mexico are slated for D-Line technology next year and hopefully US and Canadian customers will follow. 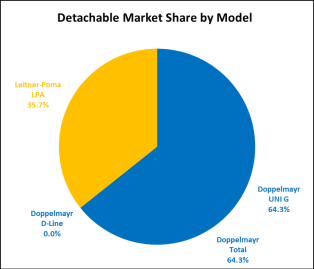 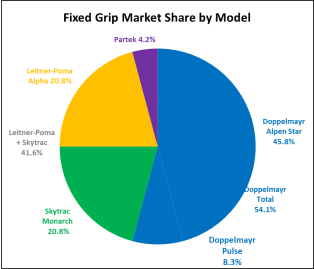 LST Ropeways didn’t build any overhead lifts in North America this year but is slated for at least one next year.  SkyTrans has a 2020 project lined up in Alaska.

2020 is just two days away and there’s reason for optimism.  Vail and Boyne already announced signature projects while Alterra, Powdr and others are likely to follow in the coming months. Some innovative point of interest projects are in the pipeline including a two gondola system at Icy Strait Point, Alaska and another at Argo Mill, Colorado.  Race programs at Sugarbush and Aspen Highlands plan to build new surface lifts for training.  Overall, announced projects are pacing slightly above last year at this time.

2019 was another record year for Lift Blog with 629 posts read more than 2.2 million times.  I was able to visit almost 150 different resorts, something I couldn’t do without the support of readers and sponsors.  The way things are shaping up, I may have even more lifts to hit in 2020! 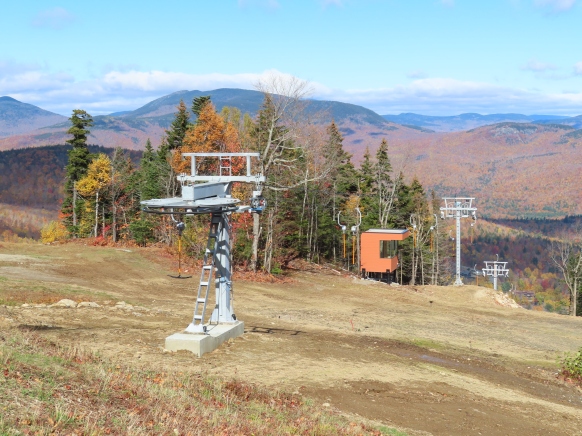