If you’ve been following the $50 million being spent at Park City this summer, you know that Vail Resorts opted not to buy a new lift for the upgrade of Motherlode to a high speed quad. Instead they are re-using the old King Con, a 1993 CTEC.  Only the tower/terminal tubes and one crossarm are new.  Tower heads and sheaves were flown into place a few weeks ago.  Electrical work is ongoing at both terminals, which still say King Con on the outside.  A new Redaelli haul rope is sitting at the bottom and chairs are ready to go at the top.  Motherlode is about 1,000 feet longer than King Con but I haven’t seen any sign that more chairs will be added. 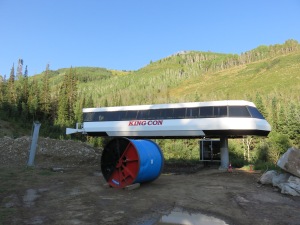 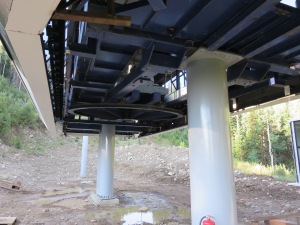