There’s a lively discussion going on over at Alpinforum about the future of detachable lifts, which haven’t gotten much faster despite huge advances in technology over the last thirty years.  The first modern detachable chairlift, Quicksilver at Breckenridge, went 787 feet a minute when it debuted in 1981.  Since then, manufacturers have installed hundreds of gondolas and chairlifts capable of going more than 1,000 fpm. 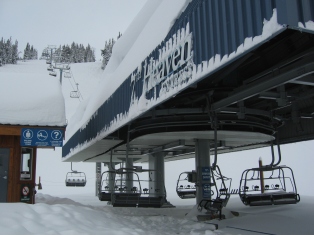 The truth is the vast majority of detachable lifts built these days have the standard design speed of 1,000 fpm (5.08 m/s) and operate even slower much of the time.  In my experience, many ski areas run so-called high speed lifts at 800 or 900 feet a minute on all but the busiest of days.  As users on Alpinforum note, ski resort operators care more about reducing stops, wear and tear than shaving thirty seconds off a ride time that the average guest won’t even notice.

These days, it’s the more lucrative urban markets where line speed gains importance. Taking the La Paz example, a transit rider on the Blue, Green and Yellow lines is traveling nearly seven miles over 40+ minutes.  When decision-makers consider a gondola system, they are comparing it to much faster buses, subways and cars over longer distances than those found in ski resorts.

Doppelmayr says its new D-Line is capable of 7 m/s or 1,378 feet/min which is 15% faster than the fastest monocable detachable lifts today.  As the below test video from Fatzer shows, bullwheels and sheaves can spin at up to 18 m/s or 3,500+ feet/min, and boy does that look (and sound) fast.  I think more realistic speeds we might see in the next 10-20 years are 10 m/s for monocable lifts and 12.5 m/s for 3S systems.  Even if these developments are aimed at urban transportation, the skier in me hopes someone, somewhere still wants to build faster lifts in the mountains.

5 thoughts on “Will Detachable Lifts Get Faster?”