In a stunning alpine setting along the Beartooth Highway in Northwestern Wyoming sits the summit of one of America’s most unique ski destinations.  “You could call it backcountry skiing with a lift,” proclaims the website for Beartooth Basin Summer Ski Area.  Located at 10,900 feet between Red Lodge, Montana and the Northeast Entrance to Yellowstone National Park, Beartooth Basin is the only ski resort in North America that opens for summer but not winter.  To give a sense of the environment we’re talking about, the parking lot sits 450 feet higher than the top of the Jackson Hole Tram, 115 miles and two national parks to the southwest.  I made some turns this spring in Beartooth Basin to check out the lifts shortly after the pass reopened Memorial Day weekend. 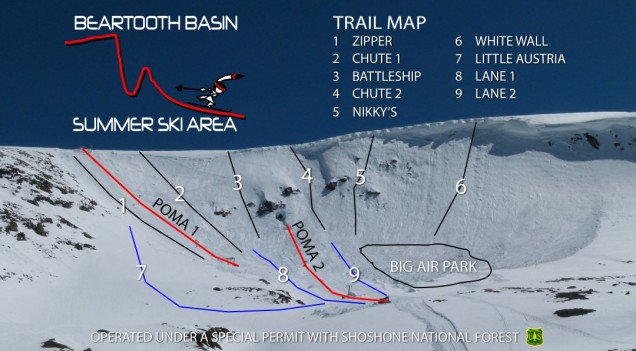 In good times, Beartooth Basin offers 900 vertical feet of skiing on six hundred acres serviced by two platter lifts that generally spin late-May through mid-July.  But everything here is subject to exception rather than rule and it hasn’t snowed enough for Beartooth Basin to open the past two years.  Even in good seasons, storms close the road and ski area, subjecting it to the whims of National Park Service plowing.  In 2005, the highway never even opened.  Despite years with too much snow, others without enough snow and still more with landslides, the dream lives on for the love of skiing.

Pepi Gramshammer of Vail fame created Red Lodge International Race Camp with help from fellow Austrians Eric Sailer and Anderl Molterer in 1967 with the purchase of a portable Poma from Jean Pomagalski.  Named for the closest town in Montana, the ski area actually lies just across the border in Wyoming.  A permanent Doppelmayr platter was added in 1983 with another one following in 1984.  Five Red Lodge locals purchased the mountain from the original ownership group in 2003 and renamed it Beartooth Basin.

Beartooth now operates as a public ski area under a special use permit from the Shoshone National Forest with similar insurance and staffing requirements to any other ski hill but with a fraction of the revenue.  Operations manager Austin Hart told me, “we have mechanics, ski patrol, lifties and all the other things other ski areas have – just on a smaller scale.  I get a lot of seasonal employees from the winter hill (RLM.)”  Snow buries the lifts all winter, which get dug out come spring much like Timberline’s Palmer Express. Both lifts pull 480 volts from a single diesel generator.  Beartooth Basin calls the lifts Poma 1 and Poma 2, but there’s nothing from Pomagalski to be found here anymore.  The mountain has no buildings, not even lift operator houses, but brings in porta-potties and a trailer to sell tickets from.  In 2014, they were $20 for an hour or $45 for the day – cash only.  A season pass costs $300.

The last time Beartooth Basin operated lifts for skiing was July 6th, 2014.  The surface lifts are a double-edged sword – low cost and requiring minimal maintenance but needing lots of snow.  When I was there, there was plenty of snow to ski down but not enough to build wide tracks for lift riders.  The Beartooth Basin team, led by Hart, remains committed to running this unique institution whenever possible.

Poma 1 got a new haul rope this spring with help from Red Lodge Mountain lift maintenance and is ready to go for years to come.  The entire Beartooth Basin operation is truly a labor of love rather than a money-making venture, as you can tell from their Facebook page.  “We’re ready if it ever decides to snow here again.  I’ll keep trying,” Austin Hart told me.  The skiing is spectacular, even when the lifts aren’t turning.