The first of two new Doppelmayr lifts under construction at Big Sky Resort this summer is a fixed-grip triple chair with loading conveyor replacing Challenger.  A 1988 Superior Tramway double to the upper reaches of Lone Peak suffered gearbox damage last February (while I was on it) and never ran again.  The new lift will be 25 percent faster than the old, ascending 1,670 feet in 9.5 minutes.  Concrete for the new triple is finished except for the operator house footers up top. The triple chair will feature Doppelmayr’s Tristar bottom drive/bottom tension station with a simple return bullwheel up top. Interestingly, Boyne Resorts has ended up with four Tristar lifts after recent incidents at Sugarloaf (x2,) Big Sky and Sunday River. 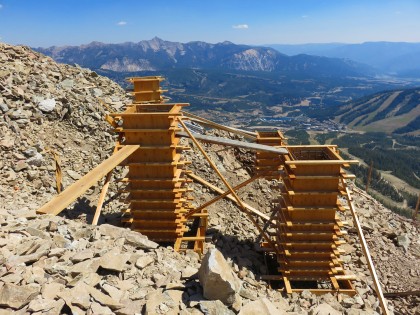 About half of the tower footings were built from scratch while others were kept from the old lift that ran in the exact same alignment.  Challenger will have 18 towers versus 15 on the old double.  Both terminal locations have been completely re-graded with much more room for loading and unloading.  Tower tubes and crossarms are in the parking lot ready to fly any day now.

The new heated-seat, blue bubble six-pack in The Bowl won’t be long but it will be wide, utilizing Doppelmayr’s 6.1 meter line gauge.  That means its 14 towers will have the European-style crossarms occasionally used in North America.  Big Sky opted for the DT double-position torsion grip over the Agamatic to match Swift Current, Southern Comfort and Lewis & Clark.  Big Sky’s second six-place will feature 90-degree loading and Chairkit queuing gates but no carpet.  It starts significantly higher than the old Lone Peak Triple and has a slightly different alignment, ending further north towards the tram line.  The bottom station will have a parking rail for the bubble chairs but no indoor storage barn, at least at first. 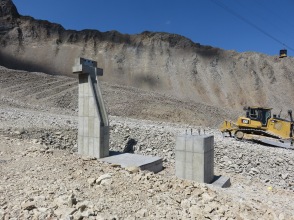 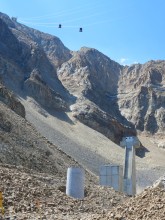 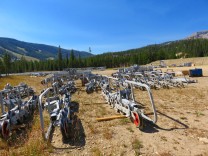 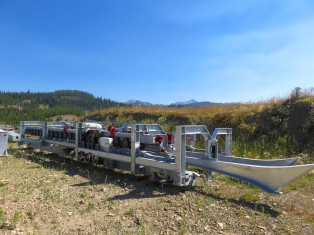 The old triple chair had a cramped unloading ramp that only allowed skiing off to the north.  A lot of rock has been pushed to make it possible to ski off from the six-pack in both directions. Doppelmayr has set the first steel at the bottom terminal with much more to follow.  All of the tire banks and big steel components have arrived in Big Sky with the terminal enclosures and bubble chairs still on the boat from Austria.  It looks like the UNIG stations will be bright blue to match the lifts at Moonlight Basin.  Big Sky’s days of painting lifts white and gray thankfully seem to be over!