The rise of Big Sky from Chet Huntley’s four-lift outpost in 1973 to the Biggest Skiing in America with 26 lifts owes in large part to the Matterhorn-like mountain named Lone Peak. Boyne Resorts bought Big Sky in 1976 and slowly grew it into America’s largest ski resort by 2013 with the purchase of Moonlight Basin and the Spanish Peaks Mountain Club.  Mr. Kircher noted none of the three mountains were financially sustainable in the 2000s and the uniting of the three has been transformative.  Now with 5,800 acres of terrain, Boyne seeks to elevate the ski experience to match the grandeur of its mountain that is unmatched in North America.  “We have a unique opportunity with the high alpine terrain here at Big Sky,” he noted.

With $13 million of construction underway on the mountain, Big Sky Resort will operate the third largest lift fleet in North America this winter behind Whistler Blackcomb and Park City.  The sprawling complex already includes two six-packs, five detachable quads and the famous Lone Peak Tram. This summer’s new lifts are just the beginning of a plan that includes the return of a gondola and ten more lifts (eight with bubbles) within existing boundaries and beyond.  Big Sky 2025 will transition the resort from one with nearly the most lifts to one with the best lifts featuring loading carpets, bubble chairs, head rests and heated seats that skiers have become accustomed to in Austria and Switzerland but rarely find in the States. 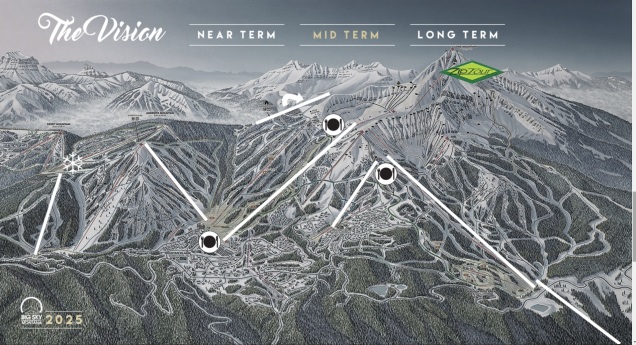 2018-2021 will see a new gondola, replacement lifts for Ramcharger and Shedhorn and upgrades to three existing lifts:

The third phase focuses on new lifts in new places, mostly within Big Sky’s existing footprint with up to 8 new lifts:

All in, the Big Sky 2025 vision includes a new gondola, replacement tram, three six-packs and seven other new lifts.  For that to happen by 2025, Boyne will need to install 1-2 new lifts every year for the next nine which is unprecedented in the modern era of North American skiing.  A reporter at the press event brought up the issue of real estate sales impacting the phasing of the plan.  Stephen Kircher countered that the Big Sky 2025 vision does not rely on revenue from real estate transactions or from other Boyne Resorts.

Big Sky has always flown under the radar despite being one of of the largest ski mountains in the world outside of the Alps.  A dozen modern lifts, new dining options and an expanded village will go a long way towards bringing the Biggest Skiing in America to the next level.