Jackson Hole Mountain Resort opens for skiing 76 days from today and the new Sweetwater Gondola will open for business in mid-December.  Since my last update, the Doppelmayr crew finished the enclosure at the bottom terminal and erected the entire drive station up top.   Doppelmayr custom-designed the lower station skin in Austria for JHMR with a round end to mimic the shape of Teewinot and Bridger.  After some initial skepticism, the consensus around here is it looks awesome and we will have to see if Doppelmayr offers the design to anyone else going forward.  The UNI-G is Doppelmayr’s standard detachable terminal worldwide but the new, boxier D-Line will be offered as an option in North America beginning next year. 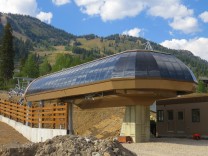 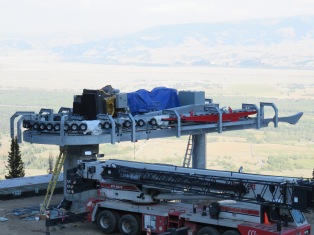 The drive platform was hauled up the hill in the back of a dump truck and includes an electric motor along with CAT auxiliary and evacuation drives.  Operator houses for the mid-station and summit arrived from Salt Lake last week along with the haul rope from France.  48 cabins from CWA will follow next week to meet their hangers and grips which are already here. Doppelmayr’s supply chain is fascinating – Sweetwater includes key components built in the USA, Canada, Austria, France, Germany and Switzerland. 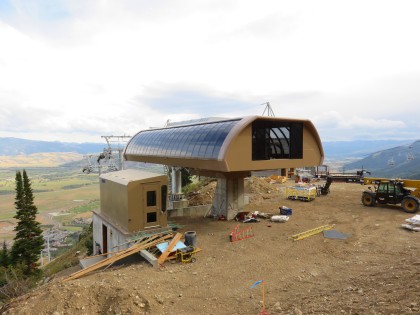 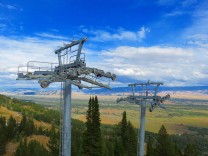 The rope will be pulled soon with a splice planned for mid-September.  As workers piece together the final enclosure at the mid-station, Doppelmayr’s electricians and alignment folks will get to work.  Keep in mind while all of this goes on, JHMR crews and local contractors are working around Doppelmayr on concrete hardscapes, boiler rooms, new snowmaking pipes, RFID gates and more.  “There are a lot of people trying to play in the same sandbox but it’s working well,” JHMR General Manager Tim Mason told the local paper.  Solitude Station will also see a new yurt and magic carpet built before Thanksgiving.  Everything is on schedule thanks to the hard work of many, many people.