With construction underway on a new lift for the ninth time in ten years, Vail Mountain will have only three fixed-grip chairlifts this winter. Adding to what is already the largest detachable lift fleet in the world outside of Europe, Vail and Leitner-Poma are now building the mountain’s 19th high-speed lift in the famous Back Bowls to replace the Sun Up #17 triple.  This is a major milestone for a mountain that in 1984 operated a whopping 19 fixed-grip chairlifts.   Following on the heels of two new six-packs from Doppelmayr USA in 2013 and 2015, Vail switched back to Leitner-Poma for its newest high speed quad, which will be designated Lift #9.  With its production facility down I-70 in Grand Junction, Leitner-Poma also supplied Vail’s Gondola One in 2012 and seven high speed quads in a row before that. Vail regulars will note that number 9 used to belong to the Minnie’s lift from 1972 until it was removed without being replaced in 2008.

The Sun Up Express will achieve 65 percent higher capacity than the 1992 triple version it replaces, which was actually one of the original lifts Doppelmayr built at Beaver Creek in 1980.  Fun fact: B.C.’s Centennial was originally two separate triple chairs.  What became Sun Up at Vail was the upper lift called Horseshoe.  The triple chair is now history and will probably find a third home somewhere in the Vail Resorts empire or beyond.

Sun Up Express’ uphill capacity will be 2,400 skiers per hour which should help alleviate crowding on lifts 5 and 9.  The Back Bowls and Blue Sky Basin will now have a combined seven high speed quads.  Lift 9 will feature 82 quad chairs and 14 towers, most of which were set last week by helicopter.  The lift will have a vertical rise of 1,115 feet and will be 3,865 feet long with a 670 HP AC top drive located near Two Elk Lodge.  Sun Up Express will be Vail’s third lift with the new LPA (Leitner Poma Automatic) grips and terminals. 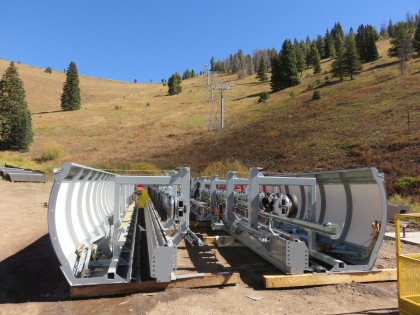 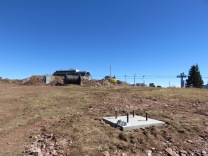 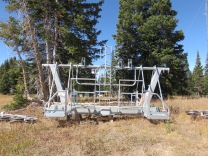 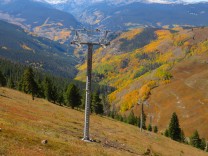 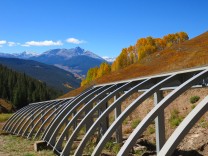 In keeping with Vail Mountain’s agreement with the U.S. Forest Service, the Leitner-Poma crew couldn’t begin construction on the new lift until after July 1 due to elk calving season.  Nonetheless, concrete work is about finished and 12 of the 14 towers are in with terminals to follow.  Most station components including the tension unit, acceleration/deceleration equipment and turnarounds have already been delivered.

Vail Resorts’ impressive and sustained investment in new lifts is likely to continue in upcoming years at its namesake mountain.  Likely on deck for replacement are the 1985 Game Creek Express #7, 1985 Northwoods Express #11, 1988 Born Free Express #8 and 1988 Orient Express #21.  Vail Resorts typically reveals company-wide lift construction plans on its second quarter earnings call in March.  While we wait for that, Vail guests will enjoy a sub-four minute ride in Sun Up Bowl this season.

5 thoughts on “Vail Nears Completion of New Sun Up Express”