With work wrapping up on 36 new and four used lifts across North America, 2016 will go down as the best year for lift construction since the Great Recession.  With Skytrac now a member of the Leitner-Poma Group, the big two manufacturers each supplied exactly the same number of lifts in North America – 17 – with one each for LST and Partek (although Skytrac provided controls for and installed the LST lift.)  Doppelmayr and Leitner-Poma also had their best years individually since 2008 and Skytrac its second best in history with five complete lifts and a retrofit terminal for Keystone.  These numbers include four gondolas manufactured in Europe by Leitner and Poma installed in Mexico and the Dominican Republic.  If only lifts built by Leitner-Poma of America in Grand Junction are counted, Leitner-Poma had its third best year since 2008 with eight new lifts.  I call it a tie.

While everyone knows the East had a horrible season last year, the Pacific states actually showed the softest demand for new lifts in 2016.  Alaska, Washington, Oregon and California have steadily declined for more than a decade and just three new lifts went in there, the lowest number since at least 2004.  The Mountain region saw 12 installations, virtually the same as last year and the second most since 2008.  The Rockies also built the biggest lifts in the country – six-packs at Arizona Snowbowl & Big Sky, high speed quads at Steamboat & Vail and a two-stage gondola at Jackson Hole. The Midwest more than doubled last year’s count, achieving its second best year since 2004 with seven new lifts while the East was well below its ten-year average with six new lifts constructed in 2016.  The big shocker: Wisconsin built more new lifts in 2016 than any other state or province with three new Doppelmayr quads at Wilmot Mountain, two Leitner-Poma quads at Cascade Mountain and a Skytrac quad at Christmas Mountain Village. 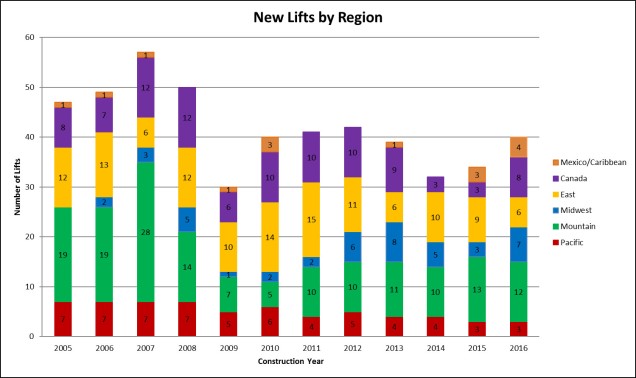 Canada finished right about average with eight new lifts, all built in the eastern provinces of Ontario and Quebec. Horseshoe Resort and Le Relais both added their first six-place detachables, which are sure to be well-received.  Look for Western Canada to rebound next year after struggling since the recession.  Perhaps most interesting is the four gondolas built for public transportation and tourism in Mexico and the Dominican Republic.  I expect growth in Mexico and the Caribbean to continue as the urban ropeway revolution spreads north from South America (and hopefully to the United States!)

Chairlift wise, 2016 was fixed-grip heavy with 21 lifts and detachable light with only 8 high-speed lifts.  That’s 33 percent fewer detachables compared with last year. Gondolas reached a post-recession high with Doppelmayr, Leitner and Poma building a combined four gondolas (only one at a ski resort – more on that later.)  Cannon Mountain added a surface lift, the first new T-Bar or platter built in three years.  Aerial tramways continued to be a tough sell in the North American market with the last new one constructed in 2013. 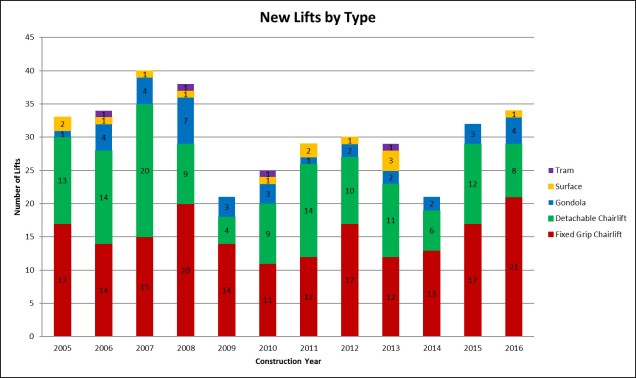 Something I started looking at last year was new lifts built for expansion vs. direct replacements for aging machines.  This year saw about the same number of lift replacements as last year – 23 vs. 25 – while the number of expansion lifts more than doubled from seven to 17.  2016 accounted for the largest volume of expansions in both absolute numbers and by percentage since 2008.  Big ones this winter include Cloudchaser at Mt. Bachelor, Green Peak at Waterville Valley and two new quads in new places at Powder Mountain.

With all the buzz about lifts for public transportation I decided to break the new lifts down by market for the first time this year.  What I’m calling “snow” still makes up 80 percent of the North American pie but that’s actually a ten-year low.  Six lifts this year were built for non-ski tourism and two dedicated to urban public transport, equaling 15 percent and 5 percent, respectively.  Examples of these include a Doppelmayr gondola at the Oakland Zoo and sky rides at fairs in California and North Carolina.  I suspect the trend towards tourism and urban transport will continue though snow will remain the manufacturers’ bread and butter.

Further good news is the number of brand new lifts has now increased five out of the last seven years.  Only four ski areas opted to install old equipment in a new location.  Lifts originally built by Blue Mountain, Hall, Stadeli and Lift Engineering got moved to new places in 2016.  Ninety percent of the new lifts built this year really were new. 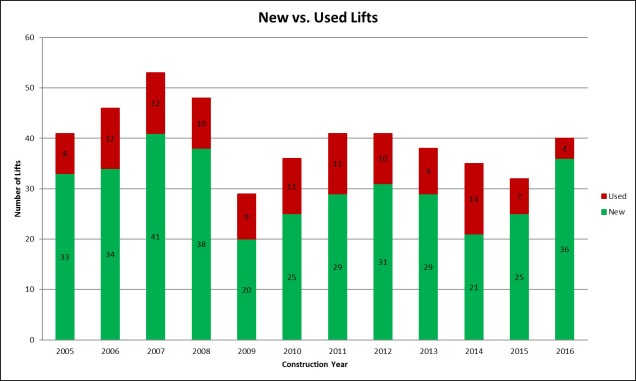 You can keep up to date on lifts for 2017 here.  Likely projects in 2017 include a huge two-stage gondola at the Yellowstone Club, six-pack at Eldora and two quads each at Stagecoach, CO and Giants Ridge, MN.  Many more installations are yet to come and as I say every year in this post, think snow.