If you follow the ski industry, mark your calendar for four months from now, the week of December 4th.  Very early one morning that week, the largest mountain resort operator in the world will release its fiscal 2018 first quarter results and, more importantly to this audience, outline capital expenditures for 2018.  Last year, this is the moment Vail Resorts committed to building three six-packs as part of $103 million in capital spending for 2017 (the company later added a fourth detachable to this year’s class, the Red Buffalo Express at Beaver Creek.)  In December 2015, MTN announced a high-speed quad for Vail Mountain and in 2014, $50 million in improvements including three new lifts at Park City plus another six-pack at Vail.  So, what might be on the likely $120+ million agenda for 2018?

You can read more about the Keystone master plan here.

As of February, Northstar has approval in hand for seven new lifts, which I’ve ordered by possible chronology below. 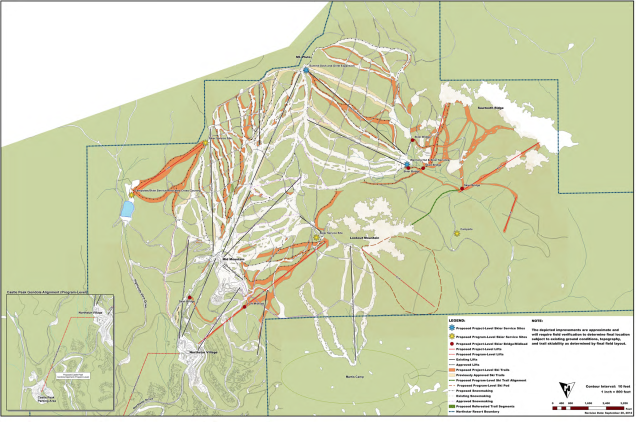 Kirkwood is unique in that Vail has not built any new lifts here since it went Epic in 2012. The biggest upgrade possibility I see is a detachable to replace parallel lifts 10 and 11. Built in 1984 and 1986, respectively, these Yan triples could have many more years of life but Wagon Wheel is 2,000 feet longer than Kirkwood’s longest detachable, with an 11-minute ride time.  A half mid-station with unloading only could allow The Reut to be removed too.

Four out of the last five times Vail bought a mountain, it added at least one new lift the following construction season.  This year’s addition the the Vail family is Stowe, a mountain already graced with six new lifts since 2004.  Still, the resort still operates at least three lifts that could potentially be replaced.

I saved the best for last.  The beast that is Whistler Blackcomb has approval for literally dozens of new lifts which I’ve outlined before.  If you look at a lift fleet like an airline or public transit agency would look at a fleet, a mountain with 30 lifts that last an average of 35 years should replace one every 1.2 years, on average.  That doesn’t factor expansion, which Whistler Blackcomb has lots of opportunities for.  With a massive infrastructure in need of renewal and room for expansion, I would be shocked if W-B did not see at least one new lift in 2018.

With two more flagship mountains and a rival empire rising, I see Vail Resorts as poised to make a splash in 2018 like it did at Park City in 2015.  Unlike peers Boyne, Intrawest (rest in peace) and Powdr, MTN has shown a tendency to centralize and it will be interesting to see whether a bunch of lift projects get lumped into one or two major contracts.  While I dare say Breckenridge is a safe customer for Leitner-Poma and Beaver Creek in the bag for Doppelmayr, many of the others are wild cards.  You can bet potential big projects at Vail, Keystone, Stowe and Whistler will be fought hard for this fall.