Hello readers- for the next two weeks I am floating the Grand Canyon without access to the internet.  I’ve scheduled a few posts for my absence, otherwise lift blogging will resume Nov. 5th     –Peter from Flagstaff, Arizona.

Happy I got a little tour of where my girlfriend works, and where they repair these lifts that I ride. @dianarupnik 🚡🛠 #whistler #liftmaintenance

END_OF_DOCUMENT_TOKEN_TO_BE_REPLACED

I always find this time of year exciting as ski resorts announce new lifts projects, many of which catch me by surprise.  This week we learned Le Relais Ski Centre, located just outside Quebec City,  will replace three lifts with a Doppelmayr six-pack capable of moving a huge 3,600 skiers an hour. Two T-bars (a 1960s Mueller and 1987 Doppelmayr) as well as a fixed-grip quad (1987 Doppelmayr) will be removed. 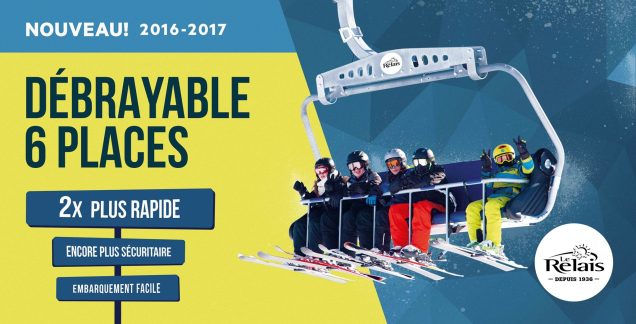 A project like this would normally re-use existing towers tubes, but Le Relais has some crazy offset towers that support both their quad chair and 1987 T-Bar.  Thus the six-pack will get brand new towers in addition to 60 six-passenger chairs.  Slope length will be just under 3,000 feet with a vertical rise of 676′. The ride will take just three minutes at 5.1 m/s.  A Chairkit loading carpet is included in the $5+ million lift, which will be built at Doppelmayr’s plant just down the road in St. Jerome. Congratulations to Le Relais Ski Centre and the Beaulieu family on what’s sure to be a huge hit with guests.