Setting aside new gondolas, bubbles and chondolas at Copper and Winter Park, the biggest stories for Colorado skiers next winter will be Arapahoe Basin’s long-awaited addition of The Beavers, Wolf Creek’s Meadow expansion and Purgatory’s new Gelande pod (the latter pending Forest Service approval.)  A year later, Copper Mountain may follow with Tucker Mountain just as Vail plans to add a new lift and trails high on Golden Peak.  If all goes according to planned, Beaver Creek will also build two new lifts in McCoy Park a year before Aspen Mountain plans to debut Pandora.  Steamboat has Pioneer Ridge and Sunshine II on the horizon, Keystone plans new lifts for Outback, Independence and Bergman Bowls and Crested Butte wants to build Teocalli 2.  Right in the middle of all this explosive ski country growth is Leadville’s Cooper, which now seeks an expansion of its own. 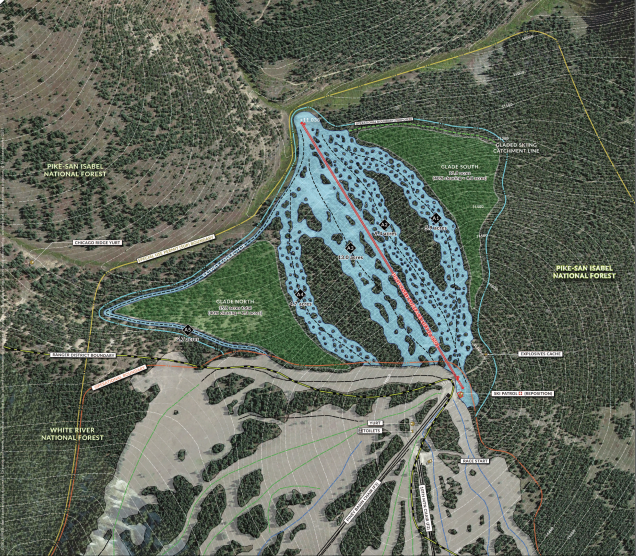 Open continuously since 1941, Cooper today operates three fixed-grip lifts and proposes adding a 2,450′ surface lift called Way Back with five advanced-intermediate trails.  It’s a modest proposal for a mountain that proudly declares “we’re not like our neighbors” on its homepage.  The new platter or T-Bar lift would load on the backside and top out near the Piney triple summit.  If approved, construction could take place as early as 2019, which I’m thinking will be a very busy summer for Colorado lift construction.  In the meantime, work is about to begin on eight new lifts, the most in Colorado since 2007.